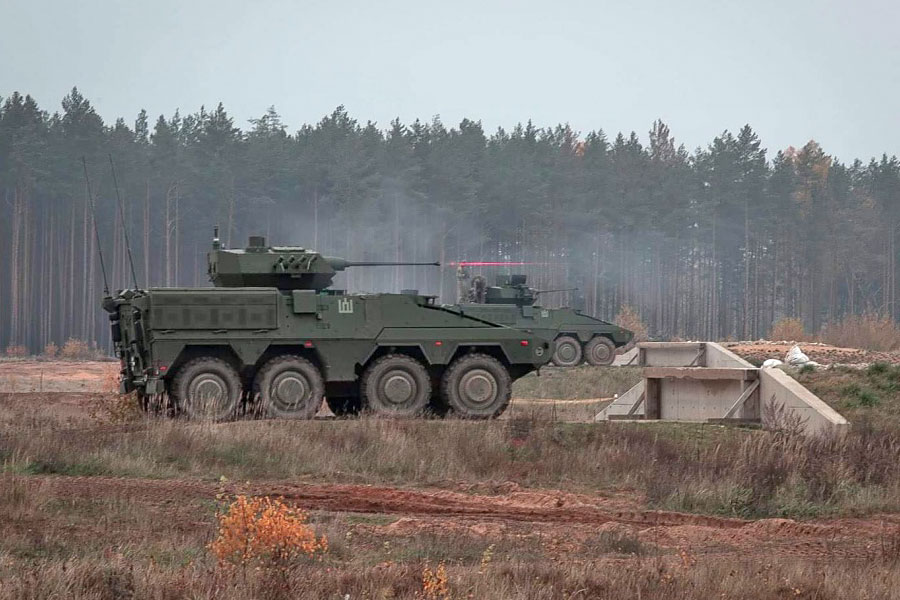 The next stage in the Lithuanian Vilkas Infantry Fighting Vehicle acquisition project is in negotiations with plans to procure 120 additional Boxers.

Press Release, Vilnius, 19 April 2022: On April 19 Vice Minister of National Defence Vilius Semeška and his delegation met with representatives of the Organisation for Joint Armament Co-operation (OCCAR), ARTEC consortium, and Krauss-Maffei Wegmann and Rheinmetall companies in Munich to discuss further prospects of supplying Lithuania with the Boxer Infantry Fighting Vehicles.

“Preparation for the negotiations began early this year and today we are able to discuss concrete amounts, value and deadlines of a potential order. It is a rational decision, and effective in terms of defence budget, to carry on with the same infantry fighting vehicle platform,” says V. Semeška. It has been made taking into account the lessons from the war against Ukraine as well.

According to Vice Minister, the contract on the new batch of armoured vehicles is expected to be signed as soon as this summer. The Lithuanian Armed Forces will be reinforced with over 120 additional Infantry Fighting Vehicles of Boxer type. Part of them will be armed with a 30 mm cannon, and the other part – with a 12.7 mm machine gun. If the contract is signed, the delivery of new batch of the Vilkas Infantry Fighting Vehicles will start in late 2023 – early 2024.

The Vilkas Infantry Fighting Vehicle derivative already in service with the Lithuanian Armed Forces are equipped with Israeli-made turrets, US-made 30 mm MK-44S cannons and Israeli-made anti-armour Spike LR missiles, as well as with other specialised equipment and electronic systems. Implementation of the contract is supervised and implemented by the Organisation for Joint Armament Cooperation (OCCAR).

Lithuania is an OCCAR member. The organisation manages and implements procurements, represents member states in negotiations with manufacturers and later on, during the armament production. It supervises Boxer armoured vehicle acquisitions for Lithuania, Germany, Netherlands and the United Kingdom. OCCAR also the manager of such procurement projects as A400M, COBRA and TIGER.

BOXER, Featured, Lithuania, VILKAS, Vilkas IFV
You may also like