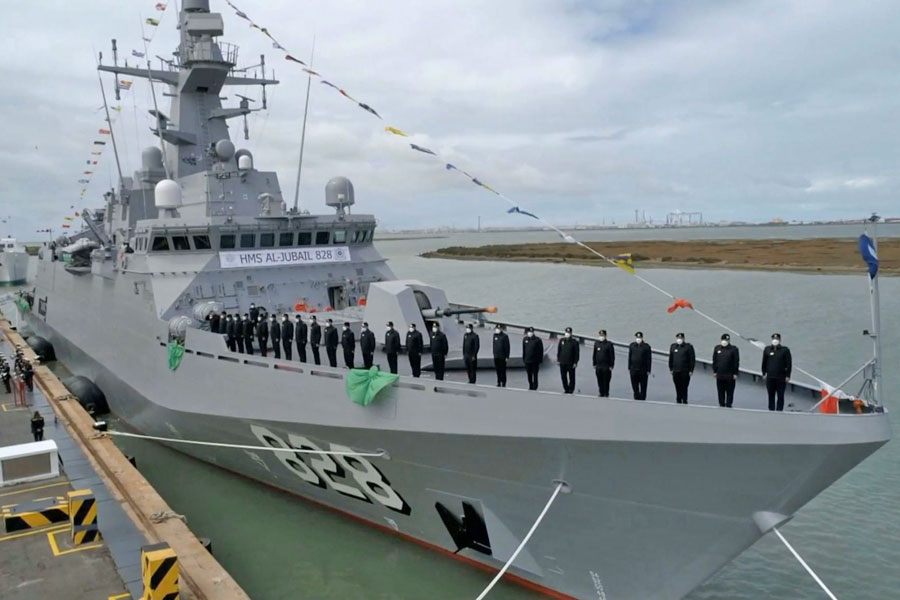 Press Release, Cádiz, 31 March 2022: Navantia delivered today to the Royal Saudi Naval Forces (RSNF) the first of five Avante 2200 class corvettes built in its shipyards in the Bay of Cádiz, in a ceremony held at the facilities of the Naval Base of La Carraca, in San Fernando (Cádiz).

The delivery ceremony of the vessel 546, named HMS AL-JUBAIL, was attended by the Commander of the Royal Saudi Naval Force, Vice Admiral Fahad Bin Abdullah Al-Ghofaily; the Spanish the Admiral Chief of Staff of the Spanish Navy (AJEMA), Antonio Martorell Lacave; the CEO of SAMI, Walid Abukhaled; and the Chairman of Navantia, Ricardo Domínguez, as well as the Secretary of State for Trade, Xiana Méndez, and the Secretary General for Industry and SMEs, Raül Blanco.

The corvette AL-JUBAIL has been delivered to the Royal Saudi Naval Forces in approximately three years since the cutting of its first steel plate (January 2019) and after having successfully passed the sea trials carried out in the waters of the Bay of Cádiz during the last few months. These tests have verified the proper functioning of both the platform and the different systems, with the aim of demonstrating compliance with the requirements specified in the ship’s contract.

The event was carried out in accordance with the military protocol. The Joint Inspection Commission (RSNF and Navantia) went on board the corvette to carry out the mandatory inspection. At the end of the inspection, the ship’s flag was raised, after which the RSNF transferred command of the corvette to the Commanding Officer of HMS AL-JUBAIL. Finally, the Chairman of Navantia presented to Vice Admiral Al-Ghofaily with the ship’s bell as an institutional gift.

In the commissioning ceremony, Vice-Admiral Al-Ghofaily stated that this ambitious programmes underline the strong and lasting strategic relations between the Governments of both Kingdoms and attributed a great credit to Navantia commitment to deliver such a state-of-the-art corvette with distinctive quality on schedule and. He also recognised the merits and commitment of all the people involved, as well as those of the Spanish Navy. HMS AL-JUBAIL is the most technologically advanced surface combatant to join the RSNF, he said. Vice-Admiral Al Ghofaily expressed his utmost gratitude and appreciation to His Majesty the Custodian of the Two Holy Mosques King Salman bin Abdulaziz, and His Royal Highness Prince Mohammed bin Salman bin Abdulaziz, Crown Prince, Deputy Prime Minister and Minister of Defence for the great attention and unlimited support that they always give to the Royal Saudi Naval Forces.

The CEO of SAMI highlighted that “this is a moment of proud achievement for the Saudi defence industry and SAMI and demonstrates our success in collaboration with leading global OEMs to serve Saudi Arabia’s armed forces. We are confident that HMS AL-JUBAIL will be a key addition to the Kingdom’s defence capability”. “On behalf of SAMI, I express our sincere thanks to the Kingdom’s wise leadership for constantly guiding and supporting us. We also extend a special thanks to the Royal Saudi Naval Forces for their trust in us. SAMINavantia continues to support our efforts to build a sustainable defence sector in the Kingdom, which includes developing the first Saudi Naval Combat System – HAZEM, facilitating defence localisation through the transfer of technology, and nurturing national talent through on-the-job training.”

Navantia’s Chairman, Ricardo Domínguez, stated his pride for “the great task carried out by the shipyard, the cooperation received from all the contractors and suppliers and the collaboration of the officers devoted to the programme both in San Fernando and in Saudi Arabia”. “I have no doubt that this ship is going to be an international benchmark in her class and a clear example of a cutting edge product. I want to highlight our commitment to transfer our most advanced technology to the Kingdom of Saudi Arabia”, declared Mr Dominguez.

From the Spanish Government, the Secretary of State for Trade expressed support to the naval industry and highlighted that the Prime Minister has announced that Spain will meet its goal of allocating 2% of GDP to defence, thus contributing to European and Atlantic security, while at the same time strengthening our country’s security.

The Secretary General for Industry and SMEs conveyed in his speech the importance of strengthening the Spanish naval and defence industry in an uncertain global environment, and of working in solid alliances with allied countries as shown today by the delivery of the corvette.