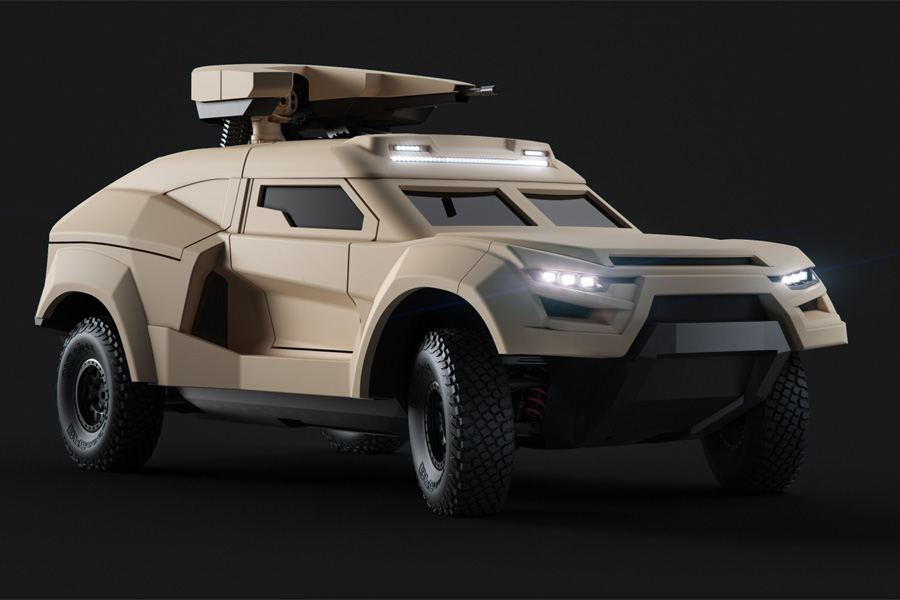 Although that same day we were able to run the company press release on their new vehicle ~ see New Cockerill i-X in the Spotlight at WDS 2022 ~ a comparatively slow hotel internet connection at prevented us downloading and then uploading the accompanying manufacturer’s video. As promised, however, we are now returning to this interesting subject and bringing a little more detail.

John Cockerill, founded in Belgium over two hundred years ago, is a mechanical engineering group with a specialist defence division known primarily for its 90mm guns and a wide range of gun turrets and remote weapon stations. The new Cockerill i-X Ground Interceptor is a complete armoured light 4×4 system, not a conversion of an existing vehicle platform, designed and manufactured entirely (with the exception of some mechanical components) within the Group. It is intended as a high speed, low profile two-person patrol vehicle with the ability to both detect and destroy a range of targets using a (patented) retracting turret with either [1] a 25mm or 30mm cannon or [2] an ATGW or 70mm Rocket launcher, plus a coaxial 7.62mm or 12.7mm secondary machine gun.

Technical details released so far are relatively limited but the maximum road speed is quoted as being 200 km/h, the desert track speed is 160 km/h, maximum road range is 600km and electric drive range is 30km. Thermal engine power is quoted as being 750hp and hybrid power is said to be 800hp, with 0-100 km/h sprint time of just six seconds. As rally raid technology has been incorporated, the Ground Interceptor has high performance suspension and built-in jacks give the ability to lift the vehicle clear in soft sand.

STANAG 4569 Level 2 Ballistic and Level 3 Anti-Mine protection is incorporated in the design. The manufacturer has stated that the Cockerill i-X Interceptor is transportable by aircraft or helicopter, as well as by road and rail, and is able to be inserted by parachute; in response to my direct question one of the design team confirmed that the vehicle has been sized to ensure it will fit inside a CH-47 Chinook when the turret is lowered into the roof recess. No precise dimensions or weights have been released as yet, but when configured for helicopter transportation (internal or underslung) the intended weight would be in the region of four tonnes.

On the observation side there is a 360°, 2-axis stabilised (TV/IR/LRF) sight with daylight range of 4,500m and thermal range in excess of 3,000m. According to the company, “The Man-Machine Interface of the Interceptor is based on the Cockerill ‘Smart Helmet’, which is worn by the operator, and features an intelligent multimodal engine allowing the management of information of the weapon system and with interactions that will be visual, auditory and vocal. All this while ensuring a measured control of the cognitive load of the operator during his mission, by using an interface that will be as intuitive as possible. The interface is no longer seen as a ‘passive’ device but becomes intelligent, efficient, immersive and uses the natural interaction capabilities of the operator, in a more ambitious context of use than usual (speed of action, multi-target, rapid movement of the vehicle).”

Although the Cockerill i-X Interceptor is still at prototype stage, we understand that pre-production trials are already underway.

Cockerill is a Registered Trademark of Belgium’s John Cockerill Defense.