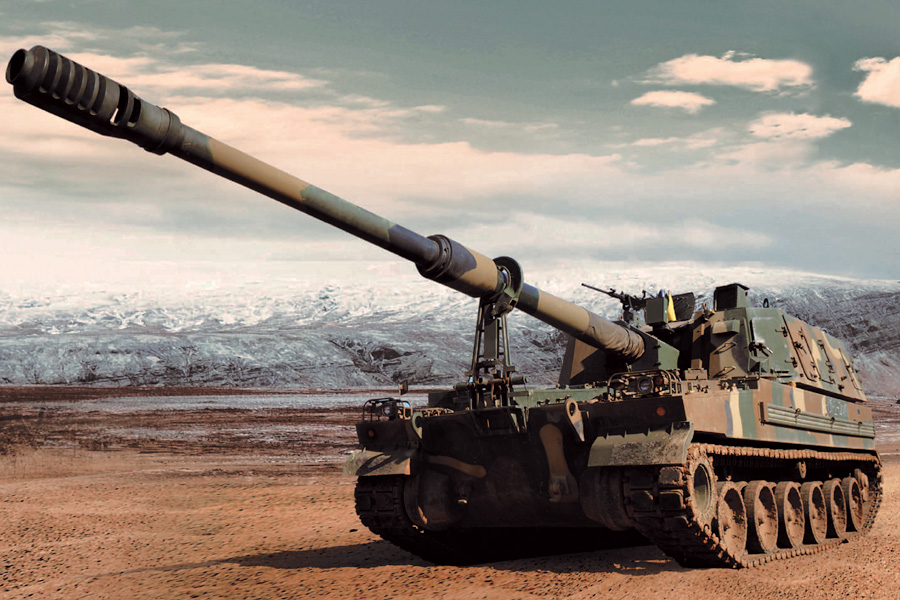 Press Release, Seoul, 03 February 2022: Hanwha Defense signed a contract on February 1 to provide a package of self-propelled howitzers and its support vehicles to the Egyptian Armed Forces.

The contract is valued around $1.7 billion for hundreds of the K9 Self-Propelled Howitzer (SPH), K10 Ammunition Resupply Vehicles, and K11 Fire Direction Control Vehicle. The deal is the largest in scale over the export of the K9 artillery solution, which has already been adopted by eight countries around the globe.

Under the contract, Hanwha Defense is scheduled to deliver the first batch of K9A1 EGYs before 2025, with the remainder to be produced at the state-run Military Factory 200 in Egypt through technology transfer. In addition, Hanwha Defense is committed to providing a variety of support programs, including user trainings and organisational/field/depot maintenance.

In particular, the latest K9 deal has marked the first export of a naval K9 variant, proving the tracked artillery’s versatile operational capability. The Egyptian Navy had long sought to acquire the K9 as an anti-access / area denial weapon system, and the K9 successfully proved its access denial capability by hitting targets precisely at sea during tests and evaluations in 2017.

Developed in 1998 by state-run Agency for Defense Development (ADD) and Hanwha Defense, the K9 SPH is South Korea’s flagship weapons systems in a dominant position of the world’s SPH market.

Since 2001, the K9 solution has been adopted by seven nations – Turkey, Poland, India, Finland, Norway, Estonia and Australia – through different types of contracts, such as the delivery of finished products, tech transfer, local production, in a way to best meet the requirements of customer nations. With the Egyptian acquisition of the K9, the K9 User Community will be expanding its membership to nine countries, further solidifying its position as the biggest player in the global SPH market.

“The latest deal with Egypt is significant in that Hanwha Defense has made its way across Africa for the first time with the K9, the world’s most advanced and proven self-propelled howitzer, amid growing partnership between South Korea and Egypt,” said Son Jae-il, CEO and President of Hanwha Defense. “I promise we will do our best to make K9A1 EGY project the best model case of bilateral cooperation.”

“Based on mutual trust and understanding, we will put our utmost efforts not only to contribute to strengthening the defence capabilities of the Egyptian Armed Forces, but also to improving the local industrial base,” Son said, adding the K9A1 EGY would be promoted in other countries.”

The K9 is equipped with the 155mm/52-calibre gun designed to meet the tactical concept of ‘Shoot & Scoot’. In layman’s terms, Shoot & Scoot means a gun moves to a firing position, completes a mission and then leaves the position before an enemy can counter it. The 47-tonne artillery has a firing range of 40 kilometres and can move as fast as 67 kilometres per hour. Fitted with an automatic fire control system, the howitzer can fire within 30 seconds from a stationary position and 60 seconds while on move, with a maximum rate of fire from six to eight rounds per minute.

The K10 Ammunition Resupply Vehicle is the world’s first automated robotic ammunition carrier operational in conjunction with the K9. The vehicle carries a total of 104 rounds and possesses the same mobility of the K9. The K11 Fire Direction Control Vehicle is a new vehicle to be developed for the Egyptian military. Using the K9 chassis, the command-post vehicle will be equipped with a range of high-tech sensor and communication equipment in accordance with operational requirements of the Egyptian Army and Navy.