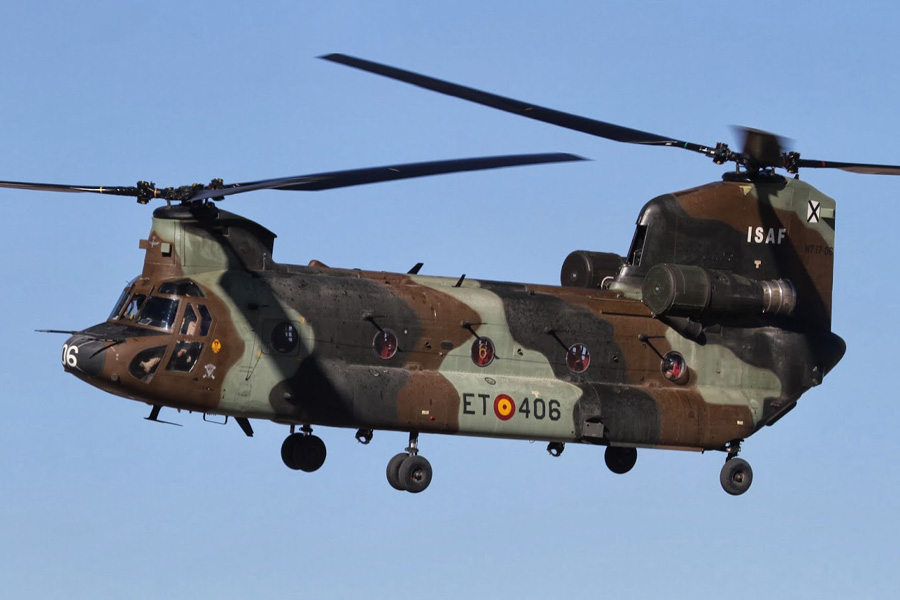 Press Release, Madrid, 18 January 2022: Indra, one of the world’s leading global technology and consulting companies, has signed a 35 million Euros contract with the Spanish Ministry of Defence to equip the Spanish Army’s Chinook CH-47F military transport helicopter with next-generation electronic defence systems that will protect the aircraft in the international missions over the coming years.

The ability to fly at low altitude and land anywhere gives helicopters a significant operational advantage over fixed-wing aircraft, but also exposes them to a level of risk that can only be countered with the most advanced technology. Indra will equip the upgraded version of the Army Chinooks with a complete state-of-the-art electronic defence suite that will enhance the aircraft’s survivability in a conflict zone.

The system will incorporate Indra’s ALR-400FD radar alerter, which is fully digitalised with fibre optic interconnections and is ready to detect and identify at long range the presence of enemy platforms and other radar threats. Its ability to instantly monitor the entire radar spectrum, instead of covering different bands through partial band scanning strategies as was normal in previous generations, allows even the most modern threats to be detected, such as those with large frequency hopping techniques.

The solution also incorporates Indra’s new InWarner sensor, equipped with a missile alerter and a laser alerter, which detects whether any designator has acquired the helicopter as a target. The integration of both elements makes it possible to achieve full situational awareness and increases the effectiveness in activating countermeasures to neutralise the attack.

At all times, but especially during low-altitude flights and takeoffs and landings, Indra’s InShield infrared countermeasures (DIRCM) system will protect the aircraft against MANPAD-type short-range surface-to-air missile and infrared guided missile attacks. This advanced solution directs a beam of laser energy onto the missile’s thermal guidance system to deflect it, so it can neutralise multiple attacks practically instantaneously. The helicopter will additionally be equipped with chaff countermeasure dispensers and flares to neutralise these attacks.

The self-protection suite of the Spanish Chinook consolidates Indra’s new airborne electronic defence standard, in which the RWR ALR-400FD radar alerter (contracted in 2020 for NH-90) and DIRCM InShield (contracted in 2017 for A400M and in 2020 for NH-90) are joined by the InWarner as a state-of-the-art laser warning sensor (LWS) and missile warning sensor (MWS). This self-protection system will be exportable to other CH-47 aircraft as well as to all types of fixed and rotary wing platforms.

Indra’s technology ensures the platform’s survivability and provides the Spanish Army with an increasingly important superiority over electromagnetic space in any mission. The Army’s ability to operate and deploy in a conflict zone depends on its dominance and the ability to prevent the adversary from gaining unrestricted access to it. Special operations, casualty evacuation, material transport and attack operations would be impossible without this technology.

A leader in electronic defence: Indra is one of the world’s leading manufacturers of radars and develops some of the most advanced systems in existence. It is part of the consortium of companies that has developed and is evolving the Eurofighter’s self-defence system, a key element in the superiority of one of the world’s most advanced fighter aircraft. In the same way, Indra’s technology protects dozens of air and naval platforms, both on the surface and underwater, as well as land platforms that operate in the most complex scenarios on the planet.

In the area of research and development, the company is the national coordinator of the NGWS/FCAS programme, and is also the international leader in the development of the sensors that this large airborne system of systems will carry. It is working in parallel, within the Carmenta project, on the design of the future European self-protection system for fixed and rotary wing aerial platforms, a technology designed to deal with a wide range of threats through the use of artificial intelligence and cognitive behaviours. It is also the leader of the European Crown project that will equip European fighters and aircraft with capabilities which combine radar, communications and electronic defence to dominate radio-electric space and operate at an advantage over the enemy. Finally, Indra is one of the three companies designated as national coordinators of the NGWS/FCAS, Europe’s air combat system of the future. Indra is the international leader in the pillar in which the state-of-the-art sensors of this programme are being developed, and is also the national leader of the programme’s two transversal pillars and the main partner in the Combat Cloud.