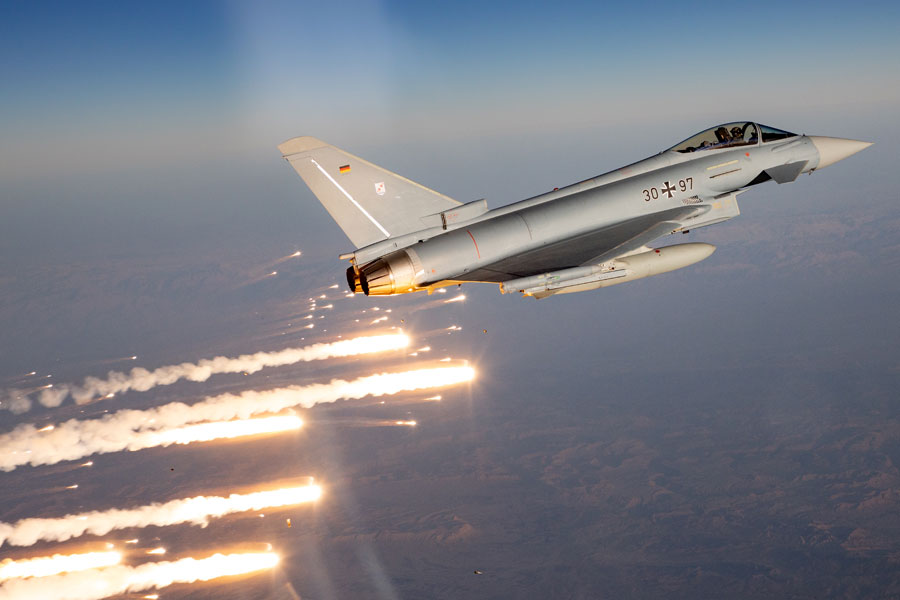 The award of €260million ECRS Mk1 contracts will see Leonardo play a core role in E-scan radar for the German and Spanish Typhoon.

Press Release, Rome 14 January 2022: Leonardo, which leads the development and delivery of the Typhoon’s ECRS Mk0 and ECRS Mk2 radars, will also deliver R&D work as well as key antenna, processor and APSC components for the HENSOLDT-led ECRS Mk1

Leonardo has announced that it has signed over €260M of contracts with HENSOLDT which will see the company playing a key role in the development and delivery of the Eurofighter Typhoon’s ECRS Mk1 (European Common Radar System Mk1) E-scan radar, ordered by Germany and Spain. Leonardo will conduct development work on new wideband capabilities and provide core parts of the new radar’s antenna, APSC (Antenna Power Supply & Control) and its processor. Leonardo is already the design authority for the ECRS Mk0 E-scan radar ordered by Kuwait and Qatar, the design of which underpins the ECRS Mk1, and is the design authority for the UK-led ECRS Mk2 radar.

HENSOLDT is the design authority for the ECRS Mk1 radar, while Airbus Defence & Space will integrate the radar onto the Eurofighter Typhoon. Leonardo, drawing on its leadership of the EuroRADAR consortium that produces the ECRS Mk0, is providing enablers to HENSOLDT to assume the leadership role for the ECRS Mk1, bolstering Germany’s onshore combat air capabilities. The close collaboration on this project is representative of the strong wider partnership between the two defence electronics powerhouses.

The German and Spanish ECRS Mk1 radar introduces a digital multi-channel receiver and new wideband transmit receive modules, enhancing Mk0 capability. In addition to the production of core antenna, APSC and processor components, HENSOLDT has contracted Leonardo to perform development work on wideband capabilities that will exploit these new receiver and transmit receive modules to boost the ECRS Mk1’s detection range and accuracy. The first ECRS Mk1 radar is expected to be produced in 2025.

Leonardo will deliver modules for the ECRS Mk1 from its sites in Nerviano, Edinburgh, Campi Bisenzio and Palermo. Leonardo is also leading the design of the ECRS Mk2, a new variant being developed in partnership with BAE Systems featuring a multi-function-array. Development of the ECRS Mk2 has been funded by the UK and is being supported by Italy through the ECRS Mk2 Industrial Joint Team.