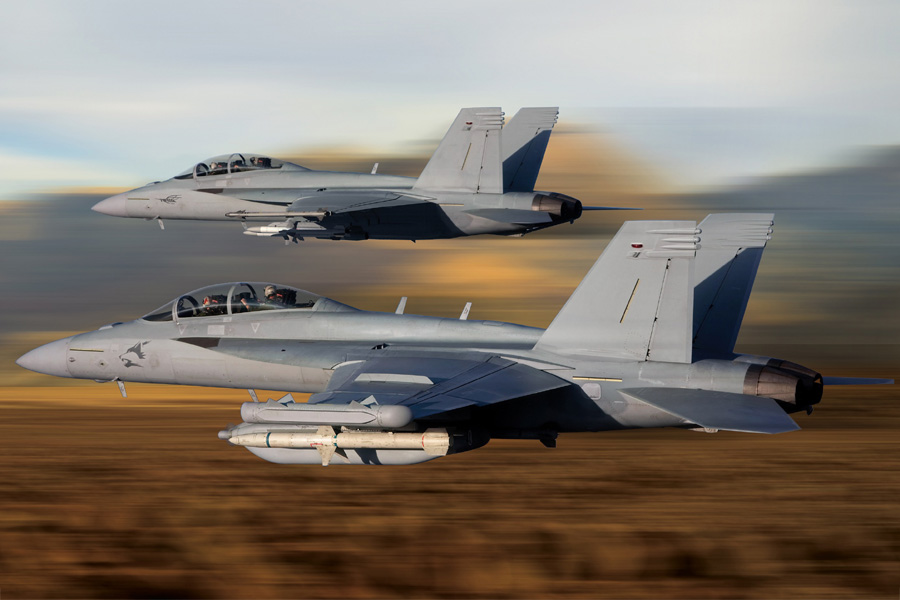 The combination of Super Hornet Block III and EA-18G Growler will give the Luftwaffe unmatched capability in both air-to-air and surface-to-air missions, says Boeing [© Boeing]

Press Release, Berlin, 12 January 2022: Boeing today announced the expansion of its industrial partnership strategy in Germany in support of the F/A-18 Super Hornet and EA-18G Growler offering to the Bundeswehr. A Request for Information (RFI) was issued to more than 10 German companies to solicit bids.

German industry partners will play a significant role in providing support equipment, logistics and overall maintenance, parts, local sustainment programs, training, and other relevant repair and overhaul solutions for Germany’s potential Super Hornet and Growler fleet. German industry will also have the opportunity to participate in the development of the Next Generation Jammer for the EA-18G Growler.

The RFIs are the first step towards in-country sustainment worth approximately $4 billion USD/ €3.5 billion over the lifecycle of the programs, and will contribute additional economic opportunity and value to the German economy as the programs evolve.

“Germany is home to outstanding aerospace expertise and innovation and we look forward to expanding our partnerships locally for Germany’s F/A-18 Super Hornet and EA-18G Growler fleet,” said Dr. Michael Haidinger, president of Boeing Germany, Central and Eastern Europe, Benelux and the Nordics. “With this partner expansion strategy, we are laying the foundation for new business opportunities for German industry champions, high-skilled new jobs and long-term economic growth.”

With the lowest operating costs of all US tactical aircraft in production ($19,500 USD / €17,000 per flight hour, source: US DoD Special Acquisition Report), combined with low procurement costs, the Super Hornet saves billions of dollars/Euros over its entire service life of +10,000 flight hours. This makes the Super Hornet the most cost-effective solution for the German Luftwaffe.

The EA-18G Growler provides full spectrum protection, jamming radars and disrupting communications, and the combination of Super Hornet Block III and EA-18G Growler will give the Luftwaffe unmatched capability in both air-to-air and surface-to-air missions. This has been demonstrated the last fifteen years, as the EA-18G Growler has spanned the globe in support of all major and rapid reaction actions. Five EA-18G Growler Squadrons uniquely support the US Air Force and US Navy operations.