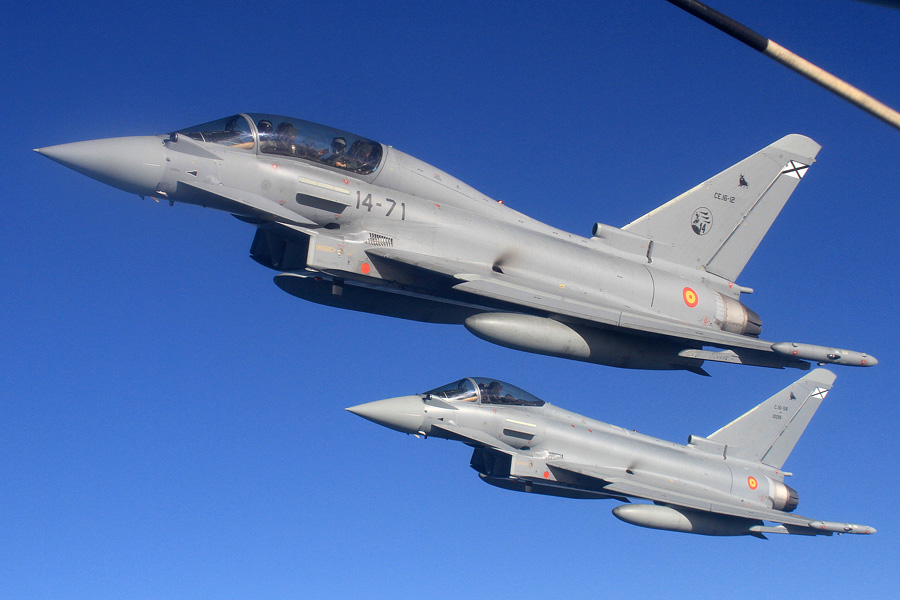 Indra is to equip the Spanish Air Force’s new Eurofighters with state-of-the-art technology and maintain the existing fleet for over 180 million Euros.

Press Release, Madrid, 22 December 2021: Indra, a leading global technology and consulting company, will equip the Halcón Programme’s 20 new Eurofighters, set to replace the F18s at the Gando air base in the Canary Islands, with the ESCAN electronic scanning radar and the DASS (Electronic Defence System), some of the most advanced avionics and sensor systems in the world, which will ensure the superiority of the aircraft in the coming decades.

The value of these production activities is in excess of 80 million Euros. Furthermore, Indra has renewed its maintenance contract for the existing fleet, which represents revenues totalling 100 million Euros, at a rate of 20 million per year for five years.

Ignacio Mataix, Indra’s Chief Executive Officer: “Indra is the second-largest supplier of avionics systems for the Eurofighter, and the only European company to be involved in the different radar systems the Eurofighter will use in the future. This ensures it has in-depth knowledge of a key technology in the defence field. This achievement is directly tied to our commitment to the continuous development of state-of-the-art technologies, the digitalisation of defence systems and our goal to pave the way for the Spanish industry to participate in large-scale defence projects, relying on our position as global leader”.

The Halcón programme includes equipping the 20 new Spanish Eurofighters with next-generation electronic scanning radar. This is one of the most advanced on-board radars that a fighter plane can carry. It is designed to ensure that the aircraft will be able to engage in the conflicts that will arise in the coming decades.

The system will provide this aircraft with the multi-function capabilities it needs in order to simultaneously track multiple targets at close range while scanning the airspace hundreds of kilometres for potential threats. The sensor ensures the aircraft will have the air-to-air and air-to-ground combat dominance the Spanish Air Force demands.

In addition, as a member of the EuroDASS consortium, Indra will provide the DASS protection sub-system. This element alerts the pilot if threats to the aircraft are detected and activates countermeasures of different kinds to neutralise the attack, interfering with and deceiving the enemy’s electronic systems. This is the system that is essential for the protection of the aircraft and its pilot and without which it would be impossible to operate safely in complex scenarios.

The Halcón programme contracts also include the supply and integration of over 15 additional sets of avionics equipment for the different key sub-systems of the platform, such as the communications and cockpit survival systems, consumables monitoring, and platform health management.

This new programme is in addition to the contract for over 100 million Euros that Indra announced last July to equip 38 German Eurofighters with state-of-the-art technology.

Indra’s participation in the evolution of the Eurofighter will complement its role as the Spanish industrial coordinator of the NGWS/FCAS Future Air Combat System development program, for which it is the international leader in the sensor pillar and the domestic leader in three other pillars.