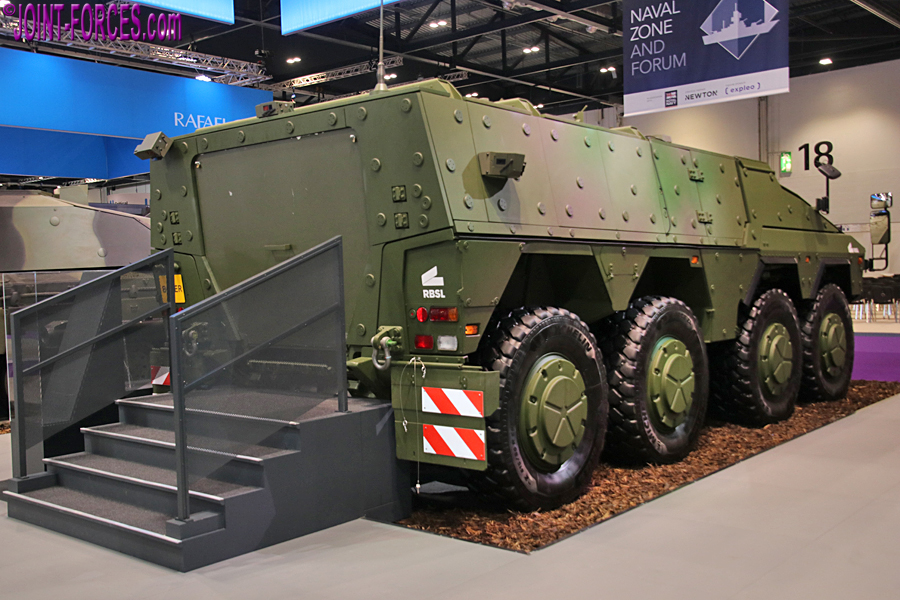 Rheinmetall and RBSL unveiled the first ever Boxer MIV variant fitted with a mortar mission module at the DSEI 2021 expo last week.

The prototype mission module was developed and built in the UK, delivered by an experienced team of engineers and specialists at RBSL’s manufacturing facility in Telford, drawing on the skills and technology shared with Rheinmetall. The project has been an opportunity to demonstrate the versatility of the Boxer platform, and its ability to satisfy a range of customer requirements. The mortar capability, combined with Boxer’s battle-proven design, also provides a valuable opportunity for UK exports – driving prosperity for the UK.

The prototype uses an 81mm mortar weapon system (MWS81), supplied by Rheinmetall, to demonstrate an indirect fire capability for Boxer crews. The MWS81 is semi-automatic, ensuring minimal mechanical movements and therefore safer performance and higher rate of fire. The system can fire High Explosive (HE), Smoke, Illumination and other 81mm ammunition, with a fully-automated aiming sequence. The system is also compact, providing increased storage space for ammunition in the vehicle.

The Boxer mortar mission module is versatile, allowing third-party barrels to be integrated, as well as ballistic computers for fully-autonomous operations (in keeping with the ‘human in the loop’ principle, however, the fire order is never an autonomous decision). The MWS81 is also equipped with back-up functionality in the event of any system failure to ensure sustained and credible power.

The contract was awarded, via OCCAR, to Artec GmbH – a joint venture between Rheinmetall and Krauss-Maffei Wegmann (KMW). Much of the fleet will be manufactured by UK companies, RBSL in Telford and WFEL in Stockport, supported by a nationwide supply chain that will create and sustain c. 1000 jobs, including apprenticeships. Welding on the first MIV prototype vehicles began at Rheinmetall’s plant in Kassel in June 2021, with delivery of Rheinmetall and RBSL’s portion of the vehicles due from 2023.

The Boxer – versatile and battle-tested: The Boxer is a heavily protected 8×8 wheeled armoured vehicle. Its modular architecture enables a variety of variants unmatched by any other vehicle system, and it is this versatility that underpins Boxer’s rapid growth. To date, approximately 1,200 vehicles, in more than 20 different configurations, are under contract by four NATO nations: Germany, the Netherlands, Lithuania and the UK. Australia – a close partner of NATO – has also ordered a total of 211 Boxer vehicles in several different versions.