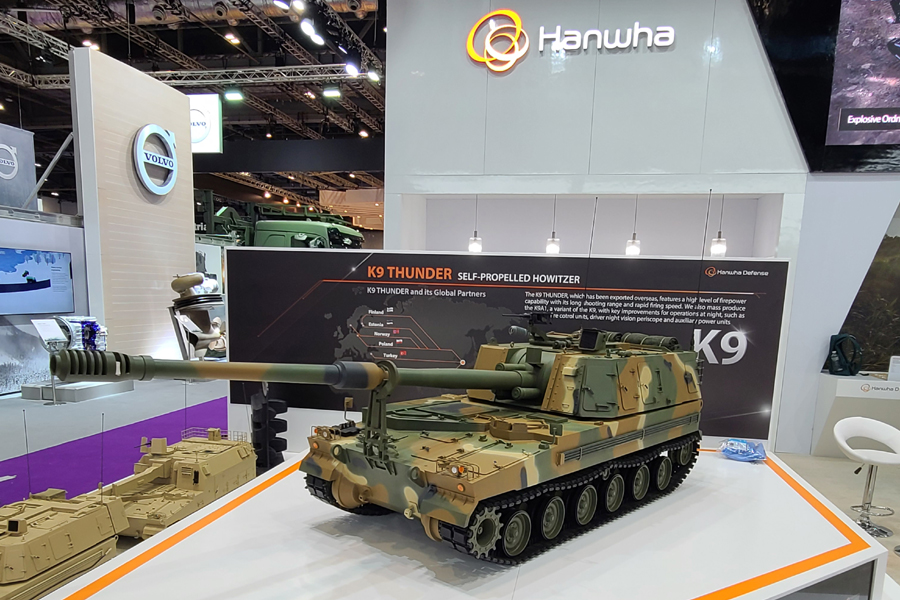 Hanwha Defense to sign MOUs with UK suppliers to form Team Thunder to offer a ‘Made in UK’ variant Self-Propelled Howitzer for MFP programme.

Press Release, Seoul, 14 September 2021: Hanwha Defense has formed a unique international partnership with leading defence manufacturers in the UK to develop a local variant of the world’s most popular self-propelled howitzer, K9 Thunder, for the British Army.

The companies have come together as ‘Team Thunder’ to bid to manufacture and supply self-propelled howitzers for the Royal Artillery as part of the Mobile Fires Platform [MFP] Programme operated by the Ministry of Defence.

During DSEI 2021, running from September 14-17, at ExCel, London, Hanwha Defense is to sign memorandums of understanding (MOU) to form Team Thunder, which includes: Leonardo UK; Pearson Engineering; Horstman Defence Systems; and Soucy Defense of the Soucy Group. Lockheed Martin UK is also in talks to join the Team Thunder and more partners may be announced later.

“Team Thunder will be a key pillar of Hanwha Defense’s bid for the Mobile Fires Platform programme, and the formation of Team Thunder demonstrates a firm commitment to bringing the maximum benefit to the UK industry through a robust partnership with local suppliers,” said Vice President Mr. Oh Kyehwan of Hanwha Defense’s Overseas Business Division. “We believe the combination of UK industrial expertise and South Korean technology will generate an incredible level of synergy.”

Utilising on each partner’s expertise in the given areas, the work scope of the Team Thunder partner companies will be discussed in a way of maximising the benefits to the UK industry, Oh said, stressing a substantial part of the manufacturing will take place in the UK. Other localisation plans will include training programmes to support workforce development and provide opportunities for local graduates and apprentices.

Hanwha Defense has already had positive experiences of industrial partnerships in Poland and India with regards to the manufacturing of K9 vehicles, whilst industrial capability programmes are also taking shape in Australia for potential production of K9’s Australian version – AS9 Huntsman – under the LAND 8116 Protected Mobiles Fire programme.

The Team Thunder partnership is established with one eye on the export market with the potential for the UK to become a regional hub within the global supply chain of the 2,400 K9 family vehicles, including K10 ammunition resupply vehicles. For the MFP programme, Hanwha Defense will offer the most advanced version of the K9 155mm/52-calibre Self-Propelled Howitzer (SPH), called the K9A2, which is being developed to feature enhanced firepower, protection and mobility.

The K9A2 is to be equipped with a fully automated turret capable of firing nine rounds per minute. With the automated turret, the number of crew is to be reduced from five to three. A plan is being examined to equip the K9 with composite rubber tracks, which will bring several benefits, including improved road mobility.

Nearly 1,700 K9 variants are in service with seven countries – South Korea, Turkey, Poland, Finland, India, Norway and Estonia. Australia would be the eighth customer operating K9 vehicles, as the country is in the process of acquiring 30 AS9 Huntsman vehicles and 15 K10 armoured ammunition resupply vehicles.