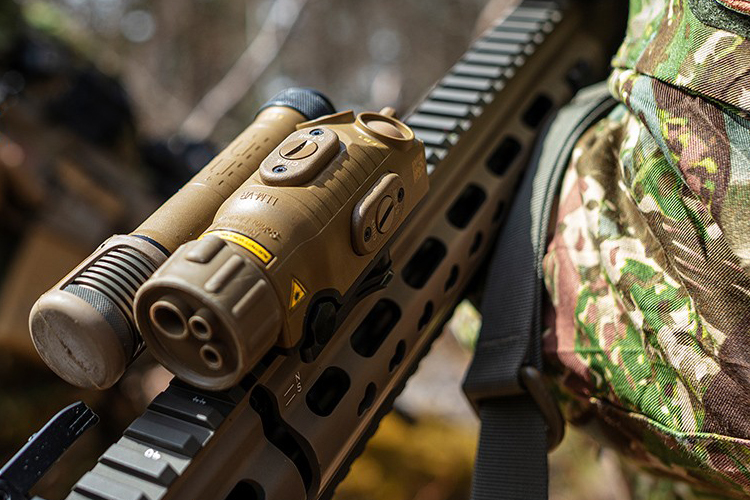 Rheinmetall Soldier Electronics is to supply the Bundeswehr with a version of the latest-generation LLM-VarioRay laser light module.

Because the devices can be mounted via a standard interface onto all assault rifles, submachine guns, machine guns and sniper rifles currently in the Bundeswehr inventory, they will greatly improve the ability of German troops to fight at night. Delivery will begin this year. The Bundeswehr will initially take delivery of 360 devices earmarked for integrated verification management. These will be followed by the remaining 2,100 laser light modules now on order.

The device selected is a version of the Rheinmetall’s latest-generation LLM-VarioRay laser light module. Intended primarily for small arms carried by infantry and other soldiers who fight on foot, it is used for detecting, identifying and marking targets.

Weighing around 250g including the bracket, the LLM-VarioRay can be mounted on any assault rifle with a MIL-STD 1913 rail / STANAG 4694 and operated via a trigger cable. It features a powerful white lamp, a red-light laser marker, an infrared laser marker and an electrically focusable infrared illuminator. The light source can be selected with a rotary switch and is infinitely adjustable. The device has a fully integrated, factory-aligned laser block, enabling easy adjustment and alignment of the aiming device and weapon. Together with night observation and thermal imaging devices, it lets German troops perform a full range of operational missions around the clock and in all weathers.

Among other things, the LLM-VarioRay product family forms part of the German soldier system ‘Future Soldier – Expanded System’ (IdZ-ES). It is also in service with the British Army, which calls it the Laser Light Module MK3, and with the Swiss Army, where it is known as the Laser-Licht-Modul 19.

Rheinmetall offers an extensive portfolio of infantry equipment, including a variety of aiming and illumination modules. These were developed in order to enhance the tactical effectiveness of modern small arms. One of these products is the LM-VTAL. Standing for ‘Laser Module – Variable Tactical Aiming Laser’, it is used by Bundeswehr special operators. Rheinmetall’s aiming and illumination devices are compatible with all standard night observation devices and can be coupled with the ‘TL-MissionLight’, a separate modular weapon lamp also made by Rheinmetall. Another top-of-the-line Rheinmetall product is the ‘FCS-TacRay Ballistic’, a rangefinder/ballistic computer for snipers and machine gunners.