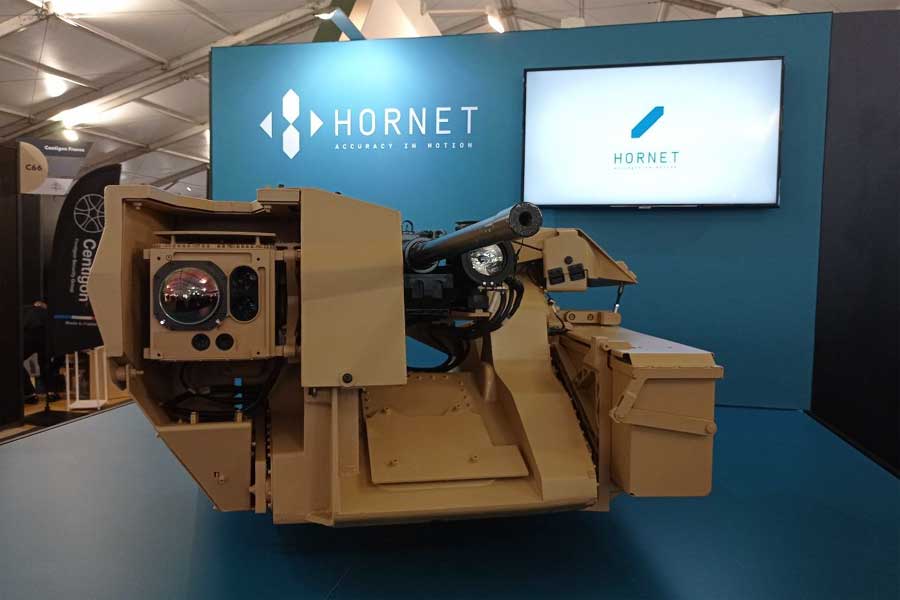 Hornet, an Arquus business unit, presents its RCWS (Remote-Controlled Weapon Stations) for the first time in France at SOFINS 2021.

Press Release, Satory, 30 June 2021: The 2021 edition of SOFINS is the opportunity for Hornet to present its range of Hornet remote-controlled weapon stations, already chosen by the French Army to equip its new generation of combat vehicles, the Griffon, Jaguar and Serval.

Within the framework of the exhibition, Hornet wishes to contribute in its own way to the reflection on the evolution of the equipment of Special Forces vehicles. This reflection is done today by inviting discussion on the relevance of modern tools such as remotely operated turrets for Special Forces units, both in France and abroad.

The remote-controlled weapon stations of the Hornet range are very versatile products, combining an effector and latest generation sensors. This makes them the tool of choice for observation, reconnaissance and intelligence, but also for information sharing, blue/red force tracking, designation of enemy targets and indirect fire guidance. It can be a tool of choice for search patrols or deep attack groups, complementing traditional Special Forces skills.

In the configuration presented at SOFINS, the Hornet turret offers unique performance in a very limited space, with a weight of only 260 kg for the turret without its options. This weight limitation makes it possible to consider using it for long-range, autonomous missions with limited equipment and ammunition. The Hornet turrets are also incomparably more accurate than a circular-mounted weapon, particularly in movement. They are gyro-stabilised from the optronic unit, which gives them exceptional stability and accuracy. The probability of hitting on the first shot is enhanced by a sophisticated ballistic solution calculation system that takes into account various parameters such as weapon, ammunition type, range, target movement and vehicle behaviour. These different capabilities allow for the reduction of ammunition carriage where necessary, while still allowing for superior tactical effects.

Designed for conventional forces as part of the Scorpion programme, the Hornet RCWS can be adapted to the very specific employment framework of Special Forces, respecting the essence of Special Forces: using equipment in a different way to carry out their own missions.

Building on the experience of the Scorpion programme RCWS, Hornet now offers high-end remotely operated weapons systems with the most advanced technologies and capabilities. The current offering includes the Hornet, the flagship product of the new range, and the Hornet Lite, a lighter version with the same optronic systems. These RCWS fully enhance the capabilities of the vehicles equipped with them, taking them to fully new operational levels. All Hornet RCWS users will benefit from the feedback and possible upgrades to the range.

Hornet RCWS have been serving on the Army’s Griffon vehicles since 2019 and will be deployed on all new combat vehicles, starting with the Jaguar and Serval. The Hornets are at the heart of the collaborative combat capabilities offered by the Scorpion programme, with each of the RCWS equipping a unit’s vehicles being capable of reacting to a threat detected by another vehicle and engaging it. The Hornet RCWS will thus be at the heart of the Army’s operational deployments in the decades to come.

Hornet was officially launched at IDEX 2021 in Abu Dhabi. It is dedicated to the promotion and marketing of the Hornet range of remotely operated turrets: the Hornet and the Hornet Lite.