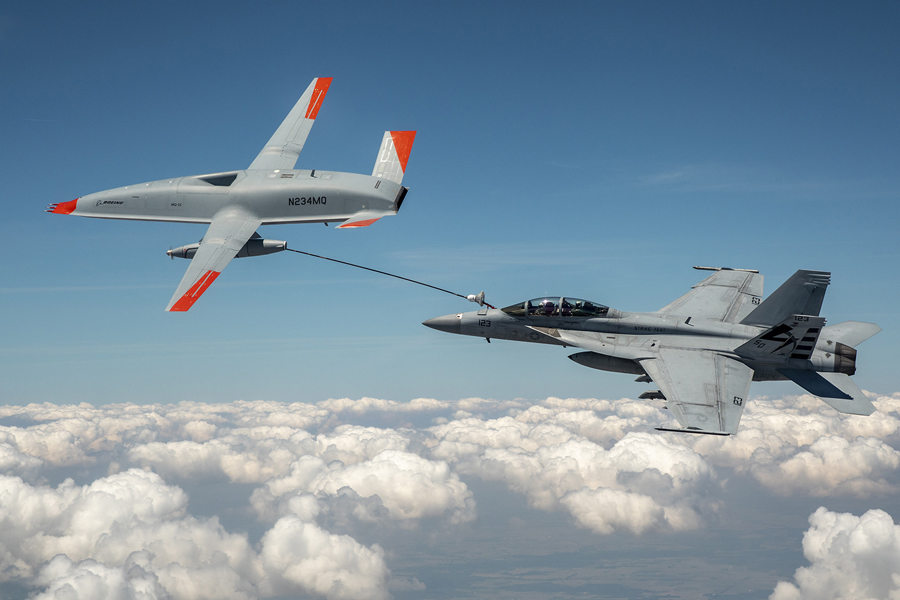 The US Navy and Boeing make aviation history with the MQ-25 T1 becoming the first unmanned aircraft to refuel another aircraft.

Press Release, St. Louis, 07 June 2021: For the first time in history, the US Navy and Boeing have demonstrated air-to-air refuelling using an unmanned aircraft – the Boeing-owned MQ-25* T1 test asset – to refuel another aircraft.

During a test flight June 4, MQ-25 T1 successfully extended the hose and drogue from its US Navy-issued aerial refuelling store (ARS) and safely transferred jet fuel to a US Navy F/A-18 Super Hornet, demonstrating the MQ-25 Stingray’s ability to carry out its primary aerial refuelling mission.

“This team of professionals was integral in the successful flight,” said Rear Adm. Brian Corey, who oversees the Program Executive Office for Unmanned Aviation and Strike Weapons. “Over the next few years, we will work side-by-side with Boeing to deliver this capability that will greatly enhance the future carrier air wing.”

“This history-making event is a credit to our joint Boeing and Navy team that is all-in on delivering MQ-25’s critical aerial refuelling capability to the fleet as soon as possible,” said Leanne Caret, president and CEO of Boeing Defense, Space & Security. “Their work is the driving force behind the safe and secure integration of unmanned systems in the immediate future of defence operations.”

During the initial part of the flight, the F/A-18 test pilot flew in close formation behind MQ-25 to ensure performance and stability prior to refuelling – a manoeuvre that required as little as 20 feet of separation between the MQ-25 T1 air vehicle and the F/A-18 refuelling probe. Both aircraft were flying at operationally relevant speeds and altitudes. With the evaluation safely completed, the MQ-25 drogue was extended, and the F/A-18 pilot moved in to “plug” with the unmanned aircraft and receive the scheduled fuel offload.

The milestone comes after 25 T1 flights, testing both aircraft and ARS aerodynamics across the flight envelope, as well as extensive simulations of aerial refuelling using MQ-25 digital models. MQ-25 T1 will continue flight testing prior to being shipped to Norfolk, Virginia, for deck handling trials aboard a US Navy carrier later this year.

The Boeing-owned T1 test asset is a predecessor to the seven test aircraft Boeing is manufacturing under a 2018 contract award. The MQ-25 will assume the tanking role currently performed by F/A-18s, allowing for better use of the combat strike fighters and helping extend the range of the carrier air wing.

*MQ-25 is a trademark of the Department of the Navy.