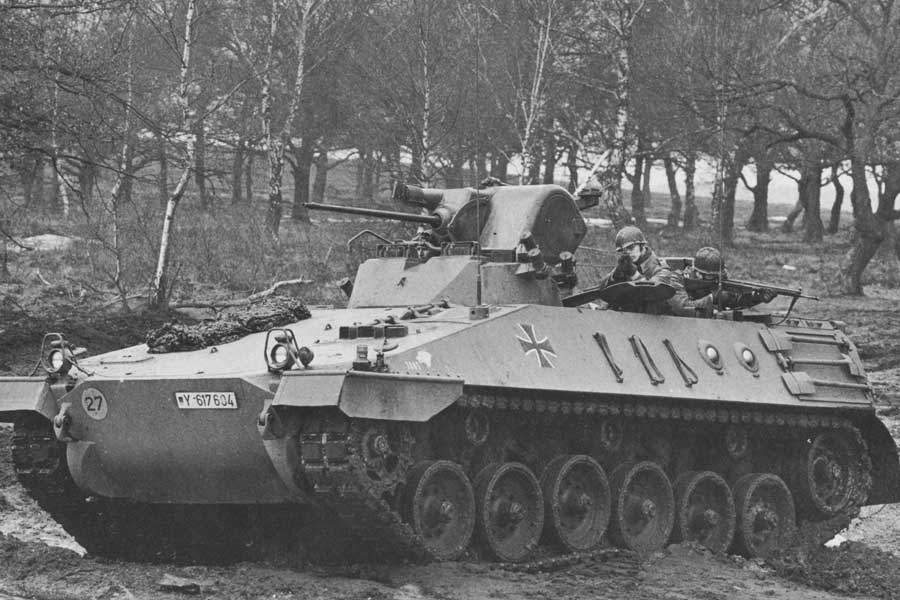 Press Release, Düsseldorf, 07 May 2021: The Marder infantry fighting vehicle celebrates its 50th anniversary today: it was a half a century ago, on 7 May 1971, that the German Army took formal deliver of the first serially produced vehicles.

This took place at simultaneous ceremonies in Kassel and Kiel – the corporate seats of the legendary IFV’s original manufacturers, Thyssen-Henschel and Krupp MaK. Both companies have belonged to Rheinmetall since 1999 and 2001, respectively.

At the time of its inception, the prime mission of the new IFV was to defend the national territory in Central Europe: teamed with the Leopard 1 main battle tank, the Marder was supposed to play a pivotal role in the mobile operations of the Bundeswehr. But fate had different plans in store for the vehicle. During the Cold War, the Marder infantry fighting vehicle’s role was confined to the major exercises held by West Germany and its NATO partners to demonstrate in no uncertain terms their readiness to defend themselves. In the meantime, the Leopard 1 has long since vanished from the Bundeswehr inventory. The same is true of other systems of that bygone era, among them the Luchs armoured reconnaissance vehicle, the Starfighter F-104 fighter-bomber, and the BO 105 and Bell UH-1D helicopters. The Marder, on the other hand, went on to prove its mettle in foreign deployments, including in Kosovo and Afghanistan. As part of the Quick Reaction Force, it has engaged in firefights in around Kunduz and Mazar-e Sharif. The vehicle continues to serve the German military to this day. Nor is Germany the only Marder user nation: the vehicle also features in the armies of Chile, Indonesia and Jordan.

Rheinmetall has accumulated vast experience and expertise in the Marder domain. On behalf of the Bundeswehr, in recent years the company has carried out various measures aimed at boosting the combat performance and extending the service life of part of Germany’s Marder fleet. This includes the installation of air conditioning in the fighting compartment; new vision equipment for the driver, gunner and commander; integration of the MELLS multi-role lightweight guided missile system; and a new drivetrain. Thanks to measures currently underway to extend its service life, the Marder is likely to remain operational until the end of the decade.

Battle-tested and extremely reliable, the Marder is destined to remain an important asset of Germany’s mechanised infantry forces for some time to come, even now that the branch is on the verge of epochal change: on 18 March 2021, the Chief of Staff of the German Army confirmed the battle-worthiness of ‘System Panzergrenadier’.

In essence, System Panzergrenadier consists of an upgraded version of the Puma infantry fighting vehicle, supplied by PSM GmbH, a joint venture of Rheinmetall and Krauss-Maffei Wegmann, and the VJTF2023 version of the Future Soldier – Expanded System (IdZ-ES), a state-of-the-art soldier system developed by Rheinmetall. Its mission is to increase the firepower and combat effectiveness of the VJTF 2023, which will be led by Germany. By fielding System Panzergrenadier, the formation will be equipped for the first time with a digitised vehicle platform – the Puma IFV upgraded to VJTF status – plus a soldier system featuring digital radio technology. Close-meshed networking of the soldiers’ sensors and effectors with those of the infantry fighting vehicle minimises the time between target detection and target engagement. This melding of capabilities into one total system enables effective tactical interaction between the troops and their infantry fighting vehicle, in turn enhancing the combat effectiveness of mechanised infantry formations.