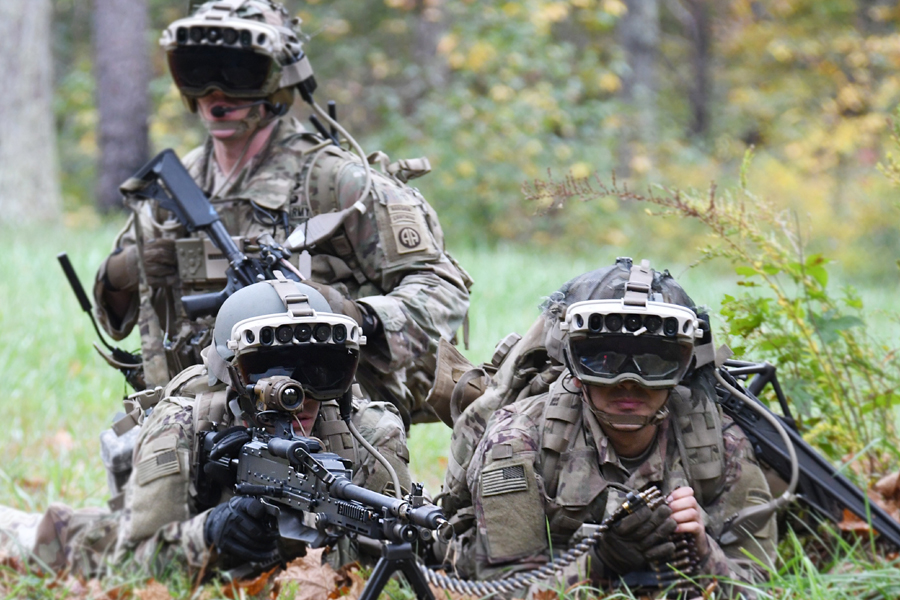 Soldiers from the 82nd Airborne Division used the latest prototype of the IVAS during a trench clearing exercise at Fort Pickett in October 2020 [US Army: Bridgett Siter]

US Army PEO Soldier has announced the award of an IVAS (Integrated Visual Augmentation System) production contract to Microsoft Corporation.

This award transitions IVAS to production and rapid fielding to deliver next-generation night vision and situational awareness capabilities to the Close Combat Force (CCF) at the speed of relevance. The unique and innovative partnership between the Army and Microsoft accelerated prototype system development through the Soldier Centered Design approach to deliver an unprecedented system to our CCF.

The IVAS aggregates multiple technologies into an architecture that allows the Soldier to Fight, Rehearse, and Train using a single platform. The suite of capabilities leverages existing high-resolution night, thermal, and Soldier-borne sensors integrated into a unified Heads Up Display to provide the improved situational awareness, target engagement, and informed decision-making necessary to achieve overmatch against current and future adversaries. The system also leverages augmented reality and machine learning to enable a life-like mixed reality training environment so the CCF can rehearse before engaging any adversaries.

The Army’s partnership with Microsoft redefined the timeline for rapid development and production of a major defence program by taking advantage of the Middle Tier of Acquisition and Other Transaction authorities, and partnering with a non-traditional defence contractor that is an industry leader in developing innovative technology. The partnership between the Army and Microsoft illustrates areas that the Department of Defense and industry can work together towards achieving modernisation priorities in the interest of national security.