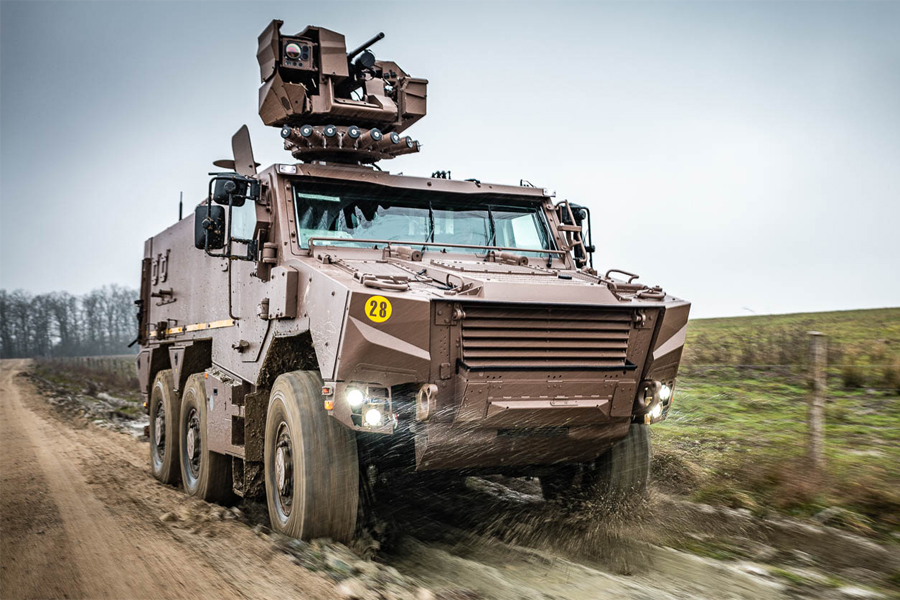 Unveiled for the very first time at IDEX 2021, the Hornet Business Unit originates from decades of designing state-of-the-art military vehicles and fitting them with the most advanced equipment. From IDEX 2021 on, the Hornet BU will be offering the brand-new RCWS of the Hornet range, namely the flagship Hornet and the lightweight Hornet Lite.

Expert of land mobility, Arquus has always used its knowledge to create world-defining and iconic vehicles which achieve the perfect equilibrium between mobility, protection, and firepower, thus dominating in the battlefield. RCWS are now at the heart of modern land combat. They offer protection and accuracy to the gunner, versatility, tactical overview, and collaborative combat capabilities to the commander. Having designed and engineered systems that deal with system stabilisation, weapon adaptation and firing accuracy, Arquus has decided to take up the challenge of combining modern military vehicles and efficient weapon systems, built for accuracy, stability, lightness, compacity.

Since 2015, Arquus has been putting together all its on-field expertise and in-house technologies, providing with a complete range of high-performance RCWS: the Hornet family, now offered worldwide by the Hornet Business Unit. In 2016, the Hornet RCWS scored their first order from the French Army. The Hornet is now being delivered to the French Army, with 1,700 units already ordered and qualified by the French Army. They provide with unmatchable on-the-move observation, firepower and protection capabilities for only 220 kg above the roof including an M2HB machine gun with 300 rounds. Hornet RCWS have been equipping GRIFFON vehicles since 2019 and will be deployed on all the Army’s new combat vehicles, namely the GRIFFON, the JAGUAR and the SERVAL. The Hornet RCWS are key for the collaborative combat capabilities offered by the Scorpion programme, as any RCWS from any vehicle will be able to react to a threat detected by another vehicle and engage it. They will be at the heart of the Army’s operational deployments in the decades to come.

Building on the experience of the Scorpion programme’s RCWS, the Hornet Division now offers high-end remote-controlled weapon stations, fitted with the most advanced technologies and capabilities. The current offer currently comprises the Hornet, the flagship product of the new RCWS range and the lightweight Hornet Lite. These systems bring all equipped vehicles to a new level by fully enhancing their capabilities.

The Hornet RCWS combine the mastery of several highly technical fields: precision engineering and mechanics, secure electronics, optronics, image processing, dynamic electrical servocontrol. They benefit from the most modern and advanced technologies: full HD digital image chain, extended connectivity with the vetronics, tactical overview sharing thanks to augmented reality. A Hornet RCWS provides with the information, reduces the processing time, improves the efficiency of the response and ultimately ensures the protection of the vehicles and their crews.

Flagship of the new range, the Hornet offers top-of-the-market performance, especially on the move. It is gyro-stabilised from the optronics block, allowing for exceptional stability and accuracy. Fitted with a Sensor Unit designed in close cooperation with the world-class optronics company, Safran Electronics & Defense, the system offers unique performance with a full digital optronics unit and a 13’3 16/9 full HD screen. The Sensor Unit has an uncooled thermal camera and three daylight cameras for wide area awareness and target identification with continuous zoom and an eye-safe laser rangefinder. The user can seamlessly switch between day and night cameras. With its high-performance optics/optronics, the Hornet RCWS also serves as a first-class targeting device granting tactical vision and red force tracking to all units in the task group.

The system is C4I agnostic – capable of integration with Arquus Battlenet or any interface system with capabilities such as Slew-to- Cue and Far Target Location. It is compatible with the most advanced features, such as Blue Force Tracking and augmented reality applications.

Served by ISR rated sensors, a two-axis gyro-stabilised turret and a two-axis detached line of sight, the Hornet delivers highly accurate firing. The first round hit probability is enhanced by a sophisticated ballistic solution system that takes various parameters such as weapon, ammunition type, range, target motion and vehicle behaviour into account. Fire control assistance, optimised man-machine interface and high-class security standards provide a ready-to-use and easy to deploy weapon system. The Hornet is qualified with 12.7 M2HB, 7.62 MAG58 and 40 mm HK GPMG. Its third, wide-angle camera provides with situational awareness, allowing both the gunner and the commander to keep a clear picture of their surroundings at all time without getting out of the vehicle.

To increase survivability on the battlefield, the Hornet RCWS is fitted with an exclusive, independent smoke launcher system which can conceal the vehicle to avoid detection or react immediately to a threat. With the Hornet RCWS, Arquus has a game-changer with an exclusive design based on an independent ring carrying eight smoke grenade launchers. When an armoured vehicle is illuminated by a laser rangefinder or a beam rider, the Hornet, fitted with a Laser Warning System turns to face the threat and engages the smoke protection automatically or manually. As the weapon axis and the smoke grenade axis are independent, the gunner can keep the weapon trained on the tactical mission underway.

The Hornet RCWS is armoured and protected against the threats of the battlefield. It is fitted with a high-level native protection to shield all sensitive components, effectively allowing for optimal availability and survivability in combat. It also comes with a transport mode which covers the optronics and protects the RCWS’ front. The Hornet RCWS is also equipped with a world-unique, exclusive cleaning feature which guarantees the optronics’ availability at all times, including in the most demanding terrains and weather conditions. The RCWS’ gunner is thus able to focus on combat or surveillance operations without having to check the system or expose himself outside the vehicle.

On top of the RCWS themselves, the Hornet Business Unit will also be able to offer comprehensive maintenance and training services to maximise the RCWS’ service life and the operators’ performance. These services include digitalised, real-time maintenance support, as well as computer-based simulations and console training.