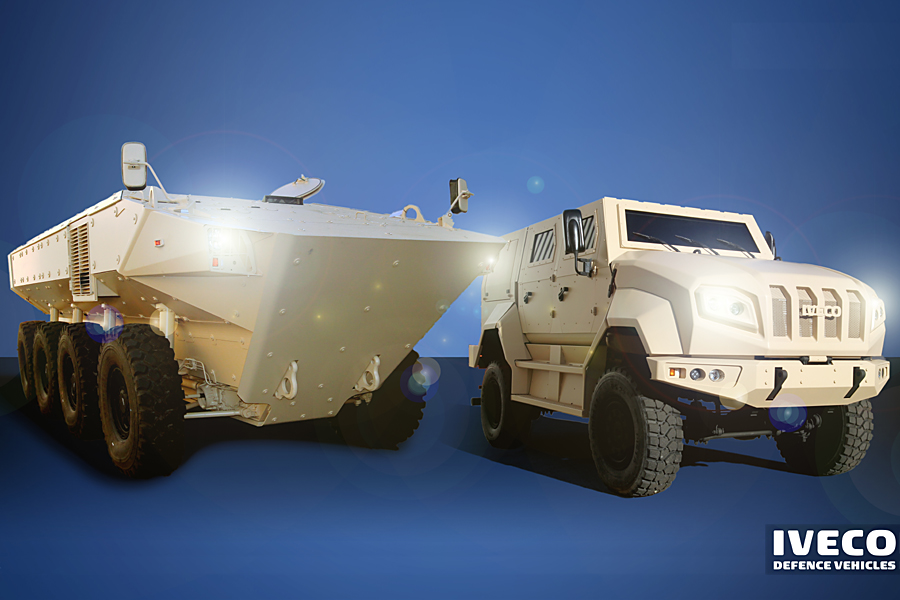 Press Release, Bolzano, 21 February 2021: IDEX 2021 (21st – 25th February) represents not only a symbolic restart but also gives Iveco Defence Vehicles the chance to display its newest developments and to highlight its latest commercial successes to customers and visitors to the show.

MTV – Medium Tactical Vehicle: Iveco Defence Vehicles benefits from a consolidated experience in the domain of multirole protected vehicles, with the best seller Light Multirole Vehicle LMV 1, adopted by 14 Countries, and the heavier Medium Protected Vehicle MPV in service in Italy and Lebanon. Both vehicles have already been extensively deployed in high-risk operations where a great number of soldiers have been saved during ballistic/mines/IEDs attacks, fulfilling one of the primary goals required by any customer. The range has been completed by a brand-new vehicle, the Medium Tactical Vehicle MTV, presented in IDEX for the first time.

Iveco Defence Vehicles multirole vehicles range now includes vehicles between 7 and 19 tons GVW: MUV – Multirole Utility Vehicle, LMV 1 and LMV 2 – Light Multirole Vehicle, MPV – Medium Protected Vehicle and the new-born MTV – Medium Tactical Vehicle, with a GVW of 12,000 kg, which fills a gap much requested by the market. MTV is a modular and versatile vehicle platform, common base for all its variants, both protected and unprotected. This high-performance vehicle efficiently adapts to a variety of users: Army, Marines, Navy, Air Force, Special Operations Units and Military Police.

The common elements of the different variants are the 6-cylinders 6.7 litres Diesel engine, able to reach 207 kW of power and 1000 Nm of torque, the automated transmission and the permanent 4×4 wheel-drive with 3 fully lockable differentials and high and low gears. Protection is a fundamental feature as well: Iveco Defence Vehicles has made use of its deep expertise gained with LMV and MPV platforms. MTV variants, short and long cab and monocoque, are manufactured from ballistic steel and benefit from an add-on steel protection kit, which increases the ballistic and blast protection levels.

The MTV platform has been selected by the Dutch Ministry of Defence for the “DVOW 12kN and RCWS”, that foresees the procurement of 12kN vehicles, 120 of them fitted with a Remotely Controlled Weapon Station. This project has by far been the biggest procurement plan in Europe for multirole vehicles over the last 10 years, both in terms of budget and number of vehicles. On November 28th, 2019, Iveco Defence Vehicles signed the contract with the Dutch Ministry of Defence to initially provide 918 medium multirole protected vehicles. In December 2020, an additional batch of 267 vehicles has been ordered by the Dutch MoD increasing the fleet to a total of 1185 units.

SUPERAV Land: Iveco Defence Vehicles has a long-standing tradition of excellence in developing wheeled armoured platforms that dates back to the 1930s, when the plant was established in Bolzano, Northern Italy. Since then, the company has developed several 4×4 armoured vehicles for the Italian Army, but the most significant experience comes from the development of the Centauro 8×8 armoured fighting vehicle and its successor, the Centauro2.

The new SUPERAV Land 8×8 armoured vehicle represents a new era for the evolution of the company’s land platforms. Inspiration came from SUPERAV 8×8 amphibious armoured vehicle, protagonist of the US Marine Corps ACV 1.1 programme, which BAE Systems was awarded, in partnership with Iveco Defence Vehicles.

SUPERAV Land has been independently developed by Iveco Defence Vehicles, starting from SUPERAV 8×8 design, with the purpose of providing a modular vehicle for land operation with higher protection level and survivability, while relying on high-level system reliability, thoroughly assessed during thousands of hours of demanding performance and capabilities tests. Equipped with a new generation Iveco 6-cylinder multi-fuel engine with 700 horsepower and 3.000 Nm torque, coupled with an automatic 7 speed transmission coupled with retarder and with proprietary H-type driveline, SUPERAV Land provides unique performance in terms of speed and acceleration, performing best-in-class mobility on all terrains.

The suspended interior seat structure can host up to 8 troops while the positions for the crew are 3. Thanks to an ideal combination of power, protection and payload, SUPERAV Land guarantees improved survivability against KE-threats, mines as well as IEDs and force protection over currently fielded systems. Its modular reinforced roof is designed to maximise compatibility with different unmanned turrets allowing uncompromised protection for the team and ensuring higher internal volumes and ergonomics. Nonetheless, SUPERAV Land is designed to accommodate extensive Government Furnished Equipment, including turrets, radios, Battery Management System, intercom and Electronic Counter Measures.

US DoD Announces $125 Million For Ukraine Security
About Post Author