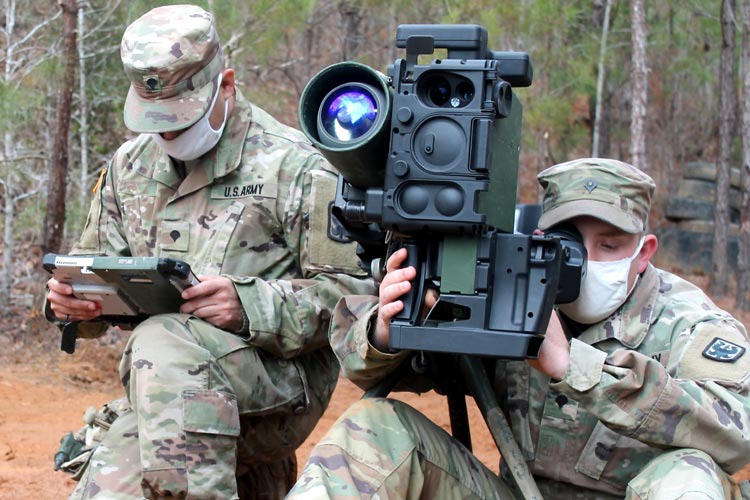 The US Army has assessed the Fire Weaver sensor-to-shooter system as part of the Army Expeditionary Warrior Experiment (AEWE) at Fort Benning.

Fire Weaver integrates as an open and modular software application with existing battle management systems and other tactical computing devices. Fire Weaver enhances ground combat capability with enhanced situational awareness and ability to maximise available combat power in GPS-denied environments. It networks sensors and formations together, providing a shared understanding on a fully digital common operational picture (COP) enhanced with augmented reality of battlefield intelligence. The result is intuitive situational awareness and common visual language “on the sights” of the battlefield for commanders and soldiers and enabling them to close sensor-to-shooter loops in seconds.

AEWE 2021 is assessing advanced technologies in support of US Army modernisation, including enhancing lethality. Fire Weaver is a key enabler for increased lethality needed by US Army Infantry formations conducting multi-domain operations. This demonstration was a joint effort between the US Army and Rafael with the Army providing an operational assessment team and a platoon of soldiers, including combat veterans and junior soldiers from the Army’s EXFOR unit.

At AEWE, soldiers operated the sensors and shooters to acquire and engage multiple targets, achieving effects in seconds where traditionally it would take minutes or longer. The artificial intelligence decision-aid algorithms provide target and weapon pairings based off a predetermined set of rules controlled by the Commander at echelon, with constant human on the loop presence for lethal tactical decisions.

The soldiers received half a day’s training and operated the systems by themselves, commenting on its intuitiveness the difference it would make in combat. The soldiers also explained and demonstrated the system to senior leaders that were in attendance from across the force, Army Futures Command, DEVCOM, TRADOC, HQDA, and FORSCOM.

Leading the team at RSGS is LTG (Ret.) Joe Anderson who stated at AEWE: “Fire Weaver provides the US Army infantry a marked advantage in overmatch. This proven and capable technology is available today for high manoeuvrability, survivability and lethality. We appreciated the opportunity to demonstrate Fire Weaver at AEWE 21 and look ahead to work with the Army on modernisation challenges against our future and peer threat adversaries.” The demonstration was part of a larger demonstration of Rafael technologies, including BNET cognitive broadband IP Software Defined Radio and SPIKE SR Precision Strike Shoulder-fired missile.