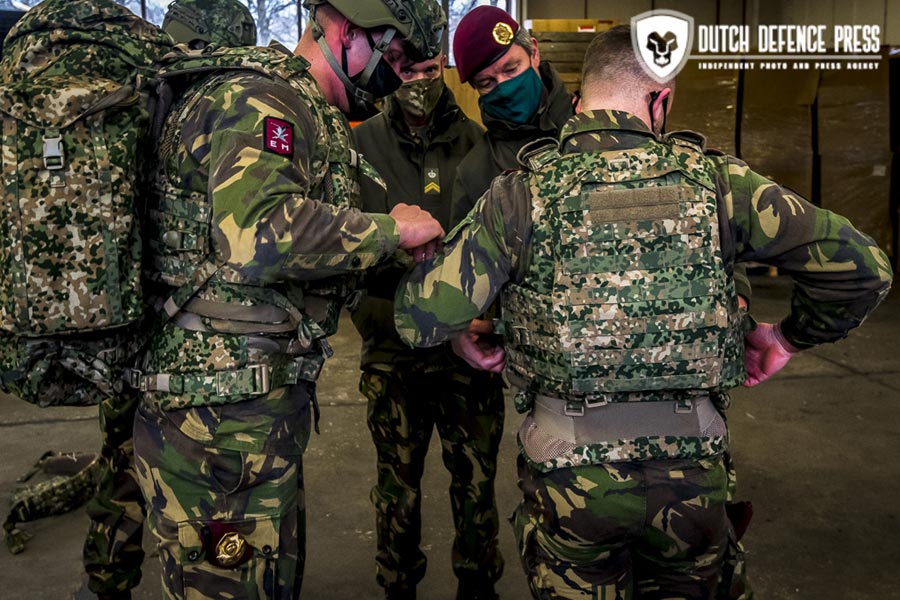 The first new Dutch personal equipment from the VOSS (Enhanced Operational Soldier System) project has been issued to an operational unit.

Our Dutch long-time friend and colleague Gerard van Oosbree of Dutch Defence Press was there to record the first issue of the new kit and filed this for us:-

Thursday January 28 was a special day. After many years of development, testing, adaptation and production, the time had finally come. The first official supply of personal equipment from the VOSS (Enhanced Operational Soldier System) project to an operational unit. This concerns the complete carrying system, battle belt and backpack. At the same time, the new combat helmet was included. Despite the milestone, the location was less glamorous, the warehouse at the barracks in Schaarsbergen where the equipment for deployments and para insertion is normally kept.

Deployment: Private Delano is one of the lucky ones to receive the package this day. His unit, the Alpha company of 12 Infantry Battalion (Air Assault) Regiment van Heutsz, Airmobile Brigade has been chosen for this honour for a reason. “We will be deployed to Jordan in May,” said Delano. “Until now we still had the old ops vest, so this is certainly a positive improvement. It all fits nicely and is matched to work together. Now we can get used to it, see how everything works and adjust everything ”. Delano is also very pleased with the new helmet. “It’s nice and light and the first impression is certainly positive.” Delano is brief about the camouflage pattern. “They must have thought about it carefully. It’s important to me that we now have the new stuff. I don’t really care about the colour. ”

KPU-Department: Normally, the soldiers have to go to the KPU-department (Clothing and Personal Equipment) in Soesterberg to get new things. Now the items are brought to the unit and handed out under the guidance of a so-called core instructor.

Brigadier General Ernst Dobbenberg travelled to Schaarsbergen especially for this occasion. Dobbenberg is Director of Weapons Systems & Departments at the Defence Materiel Organization (DMO). The KPU department is under his responsibility. “We are now starting up with regard to handing out the new equipment. That’s about fifty soldiers a week. That will soon be about four hundred a week. It is not effective to have them all come to Soesterberg ”, Dobbenberg explains. “We first come to the unit with a mobile measuring container to take everyone’s measurements for the equipment and helmet. Then we can put together the right packages and bring them to the unit. In addition, we train the core instructors of each unit. We tell them exactly how it works and they are then able to explain to their own unit how to wear the equipment”.

An important addition is the distribution of protective material for the vests. “Real bulletproof plates are expensive and are provided when deployed,” explains Dobbenberg. “We have now issued training plates to train with the weight. They have the same dimensions and weight but are a lot cheaper. ”

Core instructor: For 12-Alpha, the core instructor is the Executive Platoon Commander Sergeant Bram. “A while ago I went to the training together with the company sergeant major. There they told us which new materials we are going to work with and how exactly the adjustment should be done. My task today is to ensure that the Alpha vest, the protection vest and the backpack are all properly adjusted and that the men can move forward without injuries in the future.”

A whole book has been produced to help him. The adjustment was checked this day with a run around the warehouse with vest and backpack. After this day the men of 12-Alpha can continue to work on the adjustment and further build up the vest. We are talking about two big boxes with all kinds of pouches for magazines, radios and all the other stuff you need. And then they still have a few months to get used to the new equipment in practice in the work-up to their deployment.