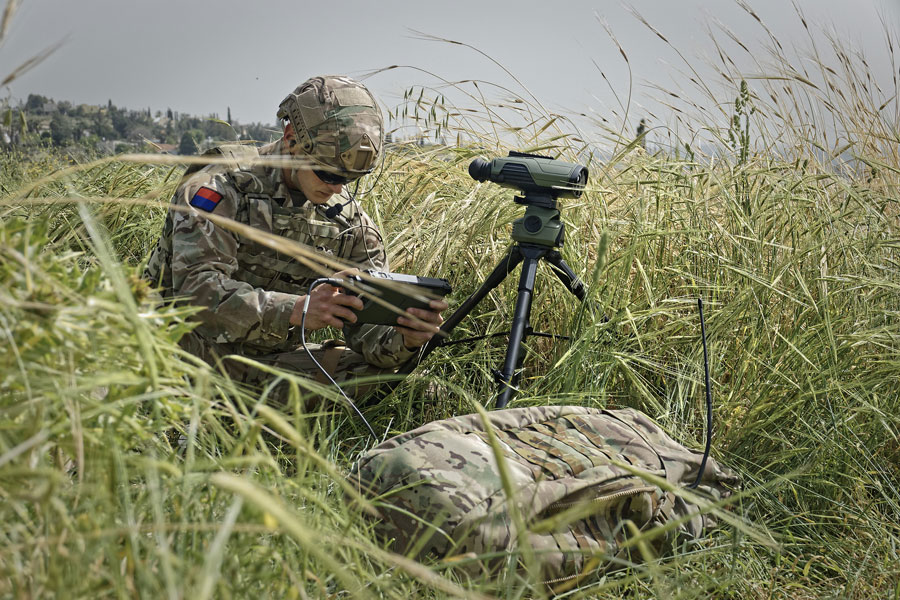 Press Release, London, 21 January 2021: Elbit Systems UK announced today that it was awarded a contract by the UK Ministry of Defence valued at approximately £100 million (approximately US$134 million) to provide the British Armed Forces with Dismounted Joint Fires Integrators (D-JFI) for Joint Terminal Attack Controllers and Fire Support Teams. The contract will be performed over a five-year period.

The D-JFI to be provided by Elbit Systems UK, is a networked, passive and active target acquisition solution that acquires, generates and communicates target information to effector systems for effective engagement of joint precision and non-precision fires. The solution is empowered by Artificial Intelligence and will interface with the radio communication systems of the British Army, Royal Air Force, and Royal Marines. The D-JFI solution draws on the Company’s operational experience in providing dismounted network combat solutions. It integrates several of its technologies, including: the TORCH-X Battle Management Application; the HattoriX system for undetectable generation of high-precision targets, the CORAL Multi-Spectral electro-optical payload for enhanced target acquisition in day and night and the powerful Rattler XR laser designator. The D-JFI will enable fast and secured transition of target information across the British and Allied Armed Forces, allowing swift and accurate utilisation of artillery and close air support.

Elbit Systems UK employs a highly-skilled team of engineers to lead the integration of this technology addressing the requirements for UK sovereignty and freedom of action. The D-JFI programme will create and support the growth of the workforce of Elbit Systems in the UK and its supply chain. This latest contract further strengthens the Company’s position in supporting the UK Army’s digitisation efforts following the awards of the Battlefield Management Application programme in 2018, the Joint Fires Mobile Trainer and the Joint Fires Synthetic Training contract in 2019.

Martin Fausset, CEO of Elbit Systems UK, said: “The UK is a significant market for Elbit Systems and the Company intends to continue with its efforts to support the British Armed Forces and expand the cooperation with the UK industry. The systems to be supplied by Elbit Systems UK represent our commitment to continuously provide the most advanced technology to those on the frontline. The adaptability to multi-domain warfare is a core part of Elbit Systems UK’s offering, combining brand-new hardware and proven-software systems. This continual evolution provides the cross-force adaptability which is vital for successful contemporary warfare. At its heart, D-JFI will provide operational advantage to the British Armed Forces in an increasingly technological battlefield.”

Defence Procurement Minister Jeremy Quin said: “This contract with Elbit Systems UK not only delivers the very latest in battlefield technology to our frontline soldiers, but also invests in the British defence industry, sustaining more than 500 jobs across the UK.”

£102-million investment in detect and destroy system for British Army.

Elbit Systems UK (ESUK) – which currently supports over 500 jobs across the UK – will deliver a state-of-the-art ‘sensor to shooter’ system creating an additional 40 highly-skilled engineering and manufacturing jobs split across Bristol and Sandwich, East Kent. Utilising state-of-the-art thermal sight technology, the Dismounted Joint Fires Integrator (DJFI) will enhance soldiers’ ability to find and identify targets on the Battlefield. It then provides the crucial targeting information necessary to fire more quickly and accurately than ever before. Using specialist software on a tablet, information gathered by the DJFI is sent digitally to an artillery system or aircraft to instantly engage the target, while the soldier operating the system remains hidden.

Defence Procurement Minister Jeremy Quin said: “This contract with Elbit Systems UK not only delivers the very latest in battlefield technology to our frontline soldiers, but also invests in the British defence industry, sustaining more than 500 jobs across the UK.”

ESUK has also confirmed all five subcontractors will also be UK-based. Additional jobs are expected to be sustained elsewhere through the UK supply chain between now and 2026.

DJFI will deliver six distinct Fires Integration equipment suites – each tailored to specific battlefield mission roles – to be combined with existing hardware and software. The technology is designed to be integrated and used alongside similar equipment used by allied forces, meaning the UK can play a pivotal role in joint overseas operations.

Major General Darren Crook, Director of the Land Equipment Operating Centre for Defence Equipment & Support, the procurement arm of the MOD, said: “Our commitment to equipping and supporting our Armed Forces has never faltered and I am delighted that we have been able to continue to secure state-of-the art equipment for the British Army.”

Colonel Sheldon, Assistant Head of the Army Joint Effects Delivery team: said: “DJFI will enable rapid and highly accurate target engagements. In addition to being fielded across the Army to our fire support teams and joint terminal attack controllers, DJFI will also deliver capability to 3 Commando Brigade, the RAF Regiment and our special forces. This is a key system that will contribute directly to modernising our forces to face future threats.”