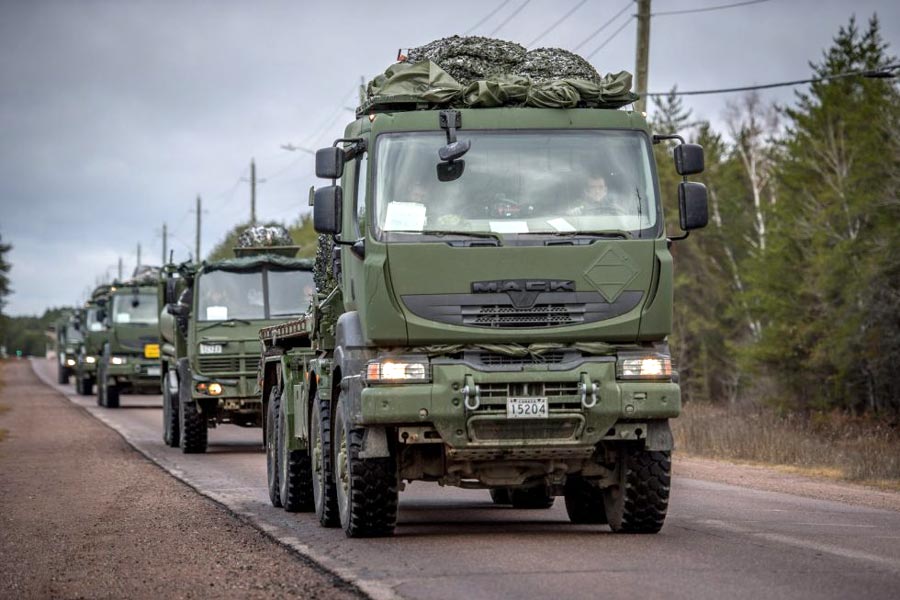 The Canadian Army MSVS trucks, supplied by Volvo subsidiaries Mack Defense and Arquus, have complete their first year in service.

Press Release, 19 January 2021: On December 4, 2019, the 1,587th and last Medium Support Vehicle System (MSVS) truck was completed on the production lines in Marolles-en-Hurepoix. It was then shipped to Canada for final integration. On February 13th, 2020, Mack Defense handed it to the Canadian Army’s officials in Saint Nicolas, Quebec, thus concluding a three-year industrial adventure which had started in France. The MSVS trucks’ first year of service has been extremely busy already, with deployments both in Canada and in foreign operations.

The Medium Support Vehicle System (MSVS) programme was designed to provide Canada with a fleet of mid-sized, multi-purpose logistics vehicles to replace their ageing Medium Logistics Vehicle Wheeled (MLVW) fleets, which had been in service since the 1980s. It also included the acquisition of Armoured Protection Systems and trailers. These new trucks and their equipment had to be able to provide a complete transport capacity (particularly in terms of loading/unloading of loads or on-board equipment) in theatres of operation, both on national territory and abroad.

Under Phase 4 of the MSVS programme, which included the provision of Standard Military Pattern (SMP) trucks, including their trailers and crane systems, armoured cabins and protective equipment, and vehicle support, Arquus Engineering and Manufacturing teams led parts of the militarisation for all five variants of the 1,587-trucks programme. This complete militarisation aimed at ensuring the vehicle met the true capabilities of a truck designed for military use.

Arquus has a solid and long experience in the design and production of logistic and tactical military carriers, both specifically designed for the military and commercially designed but transformed for military use. In France alone, this partnership with the Army continues today with the GBC8KT, GBC180, TRM10000, TRM 2000, VLRA, or Sherpa Medium trucks. In total, more than 10,000 trucks that are now used daily in the French Army alone are Arquus-made.

This expertise has recently led to the launch of a brand new logistics and tactical range, the Armis family, consisting of three 4×4, 6×6 and 8×8 vehicles perfectly adapted to the needs of modern armed forces, designed by Arquus and built by the company and its French partners. This experience enabled Arquus to take charge of the studies and design of militarised enhancements and transformations for the vehicles designed for the Canadian Army. These activities ensured the definition of a coherent global architecture adapted to the specific requirements of the Canadian Army in support of their mission profile and anticipated global deployments.

The militarisation activities were carried out at two Arquus sites, in close cooperation with other Volvo Group businesses, Renault Trucks, Mack Defense and Prevost, and under the supervision of the French defence procurement agency, the Délégation Générale de l’Armement (DGA), the programme’s agent. As part of the MSVS programme, the rolling chassis arrived from two Renault Trucks plants, Bourg-en-Bresse (bare chassis) and Blainville (cab) and were delivered to Marolles-en-Hurepoix, where a production line was purposely set up to advance assembly by adding specific enhancements such as cold weather start kits, Crane and supporting Hydraulic System installations among key activities .

A total of five variants were supported:

At the final step in the assembly line, the vehicles were treated with a specialised Chemical Agent Resistant Coating (CARC) paint in a purpose-built enhanced paint facility. In parallel, the Arquus site in Limoges, which specialises in the manufacturing of Arquus new vehicles, assembled and prepared for shipment to Canada the trimming kits for the 161 Armoured Protection Systems (APS), which were being final assembled in Canada. Limoges, also due to its extensive expertise in final assemblies of vehicles, contributed in supporting Marolles in final assemblies of the MSVS fleet in order to meet programme timelines and milestones.

311 MSVS were delivered by Arquus in 2018, and 1276 in 2019 (i.e. an average of about four trucks per day, and more than six vehicles per day during peak production activities), illustrating the company’s ability to produce efficiently a large number of vehicles in a constrained timeframe and to adapt to different rates on different configurations. Arquus has also been able to design and very quickly develop a complex production line, capable of managing different configurations.

In total, for Arquus, several dozen operators have been involved in the MSVS programme, in the Design Office, project management, production, integration and finishing, both in Marolles and in Limoges.

Arquus’ handling of this part of the programme illustrates the company’s capabilities in the design and production of military tactical and logistic carriers, as well as programme processing in partnership with a large number of players. The programme also demonstrated Arquus’ good management of a complex industrial scheme involving a large number of players (Renault Trucks, Prevost, the DGA, the Canadian customer) as well as constant communication between Arquus’ Marolles and Limoges sites. More generally, the MSVS programme demonstrated the Volvo Group’s ability to pool the many complementary skills of the companies that meet customer requirements and expectations.

The Canadian Army is very satisfied with the capabilities and quality of the MSVS trucks. All trucks have been deployed throughout Canada and have already been used in support of both domestic (Flood and Humanitarian) and International (NATO) operations.