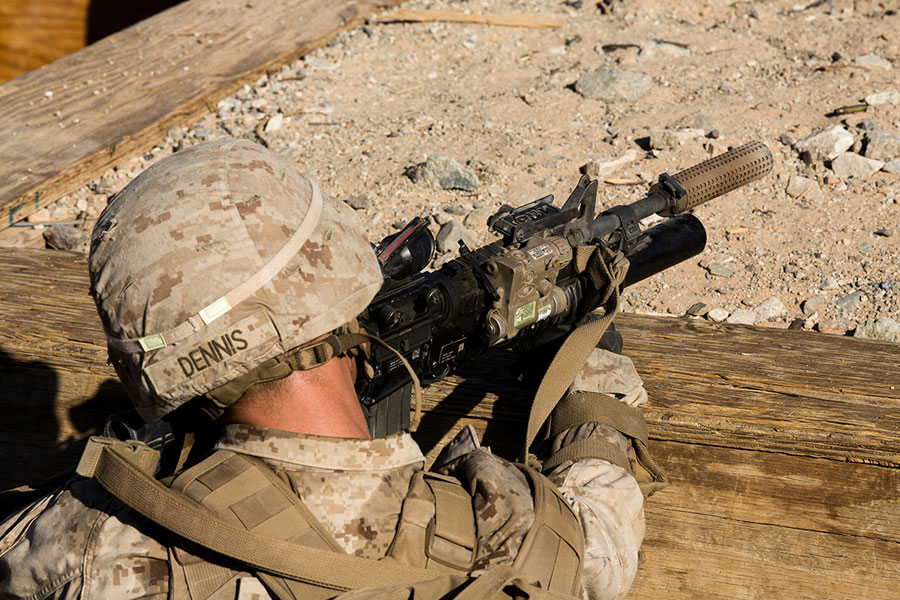 At the end of December 2020 the US Marine Corps announced the widespread fielding of suppressors on their M27, M4 and M4A1 rifles.

News Release, Quantico, 29 December, 2020: Marines risk their lives to protect others. Many are trained to locate, close with and destroy the enemy by fire and manoeuvre, or repel the enemy’s assault by fire and close combat. They engage adversaries in any clime and place, no matter how arduous the conditions.

Marine Corps Systems Command is tasked not only with enhancing the lethality of warfighters. The command also strives to protect them. MCSC has taken another step toward increasing lethality and protection for Marines. In December, the command began the process of fielding thousands of suppressors to infantry, reconnaissance and Special Operation units for employment on the M27, M4 and M4A1 rifles.

Small arms suppressors are designed to reduce a weapon’s noise, flash and recoil. They are also time-efficient, as attachment and detachment only takes a few seconds. The mass fielding of the suppressors, and their myriad benefits, represents a monumental moment for the Marine Corps. “We’ve never fielded suppressors at this scale. This fielding is a big moment for the Marine Corps.” said Major Mike Brisker, MCSC’s Program Manager for Infantry Weapons’ weapons product manager.

In recent years, the Marine Corps had already begun suppressing its M38 and M4A1 rifles. However, an increased number of commanders felt suppressing additional weapons would increase the overall lethality of the infantry. The impetus for equipping additional weapons with suppressors came from a series of experimentations at a 2016 SEA DRAGON event, which enables the Marine Corps to experiment with current and emerging technologies and operational concepts.

At the event, a battalion employed the suppressors as part of a Marine Corps Warfighting Lab experimentation. “The positive feedback from that experiment was the primary driving force behind procuring suppressors,” said Brisker. “We’ve had a few limited user experiments with various units since that time, and all of those events generated positive reviews of the capability.”

Before acquiring the suppressors, MCSC worked with the Marine Corps’ Combat Development and Integration; Plans, Policies and Operations; and the Fleet Marine Force to determine the optimal concept of distribution to support the close combat Marine. “Our intent was to leverage commercially available technology to support the near-term modernisation required for our close combat Marines,” said Billy Epperson, the Infantry Weapon Capabilities Integration Officer at CD&I.

Epperson added that the Marine Corps conducted Limited User Evaluations in 2019 with commercial suppressors provided by vendors showcasing the latest and greatest in technology to characterise requirements in support of an acquisition effort that began in fiscal year 2020.

In 2020, PM IW procured about 6,700 small arms suppressors through Defense Logistics Agency’s Tailored Logistic Program, and acquired more than 7,000 additional units on the first delivery order upon the contract award. Brisker said the goal is to field approximately 30,000 suppressors by fiscal year 2023.

How suppressors save lives: CWO4 David Tomlinson, MCSC’s infantry weapons officer, emphasised the importance of suppressors in exchanging information during battle. He said gun fights create a chaotic environment with intense noise levels, producing communication problems that can increase confusion. “I would say the most important thing the suppressor does is allow for better inter-squad, inter-platoon communication,” said Tomlinson. “It allows the operators to communicate laterally up and down the line during a fire fight.”

Tomlinson said suppressors can save lives, as Marines engaged in battle can expose themselves from their firing position. The suppressor reduces their audible and visual signature, making it more difficult for the enemy to ascertain their location. In addition to tactical advantages on the battlefield, the reduced noise of the suppressors also benefits a Marine’s long-term health, said Brisker. According to the U.S. Department of Veterans Affairs, hearing problems are by far the most prevalent service-connected disability among American veterans. “In the big picture, the VA pays out a lot in hearing loss claims,” said Brisker. “We’d like Marines to be able to continue to hear for many years even after they leave the service. These suppressors have that benefit as well.”

Tomlinson mentioned how the news of the fielding of additional suppressors has created a groundswell of excitement among the units receiving them. He believes the myriad advantages suppressors provide will benefit the Marine Corps for years to come. “As I travel and brief units, this capability has generated the most interest—from lance corporals to colonels,” said Tomlinson. “There has been an overwhelming excitement to receiving the suppressors, which we anticipate will serve as an effective capability for the warfighter.”

Featured, Firearms, Suppressor, Suppressors, US Marine Corps, USMC
You may also like