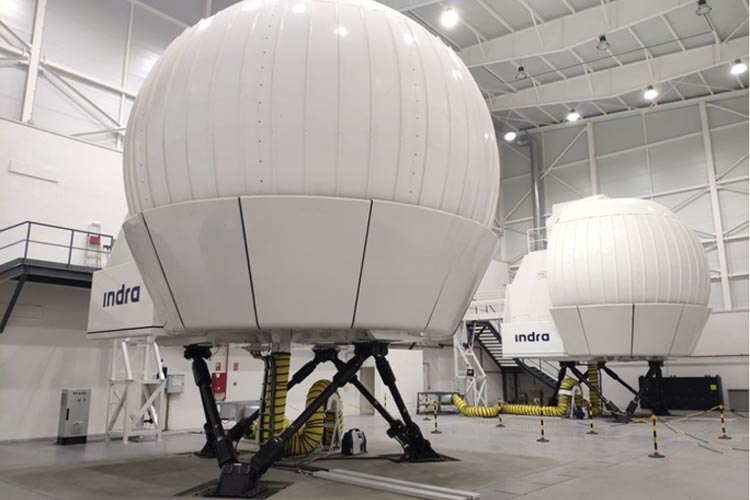 Indra has delivered the second NH90 helicopter simulator to the Spanish Armed Forces at Agoncillo military base in La Rioja.

Press Release, Madrid, 15 December 2020: Indra delivered the latest FMS (Full Mission Simulator) on November 23 to the NH90 Simulator Center, which has been in operation at the Spanish Army’s Aviation Academy (ACAVIET) CESIHEL Center, at the Agoncillo military base in La Rioja.

With this delivery, Indra positions itself as one of the few companies that offers training solutions for such complex aircraft as the NH90, which is currently being used by more than ten armies. All this, thanks to the commitment and investment effort made by the Ministry of Defence over the years in the field of helicopter simulation for the Armed Forces.

The simulation centre consists of two level “D” FMS systems, an SSS System (Simulation Support System), a CBIT system (Computer-Based Interactive Training) and two PTTs (Part Task Trainers). This simulation capability, developed and manufactured by Indra, is in addition to the existing ones for the Tiger and EC135 helicopters, capabilities which in the future will also feature the new Chinook CH-47F helicopter and the future naval tactical version of the NH90.

Confirming the importance of this simulator for the Army, the Division General Fernando M. García y García de las Hijas, Director of Procurement of the Army’s Logistics Support Command (MALE), accompanied by Brigadier General Francisco Javier Marcos (JEFAMET), Colonel Jose Antonio Fuentes (Director of ACAVIET) and representatives from the Armament and Materiel General Directorate (DGAM) as well as by the Director General of Defence and Security of Indra, Mr. Manuel Escalante, recently visited the Agoncillo base. The pride in this project was expressed as an example of a successful collaboration with Indra, not only for teaching and training but also for the preparation of today’s operational Armed Forces.

The DGAM continues to promote and rely on Indra to achieve unique simulation architecture, which has delivered such a good result in the case of the TIGER helicopter, based on the full use of all the real equipment carried on board. An architecture that achieves greater realism in training and guarantees that the future development of the FMS coincides with developments found in the aircraft themselves; as well as the use of image intensifier tubes (IITs) for flight simulations with night vision goggles (NVG) and network simulation architecture, based on the HLA standard, which provides tactical training for a team mission using several simulators at the same time, based on different bases, and using multiple platforms.

All the NH90 crews must continuously go through the CESIHEL to log the hours of simulated flights necessary to obtain and maintain their flight qualification, until the funds become available to finance the future simulation centres of the Air Force at Cuatro Vientos Air Base and Rota Naval Air Base.