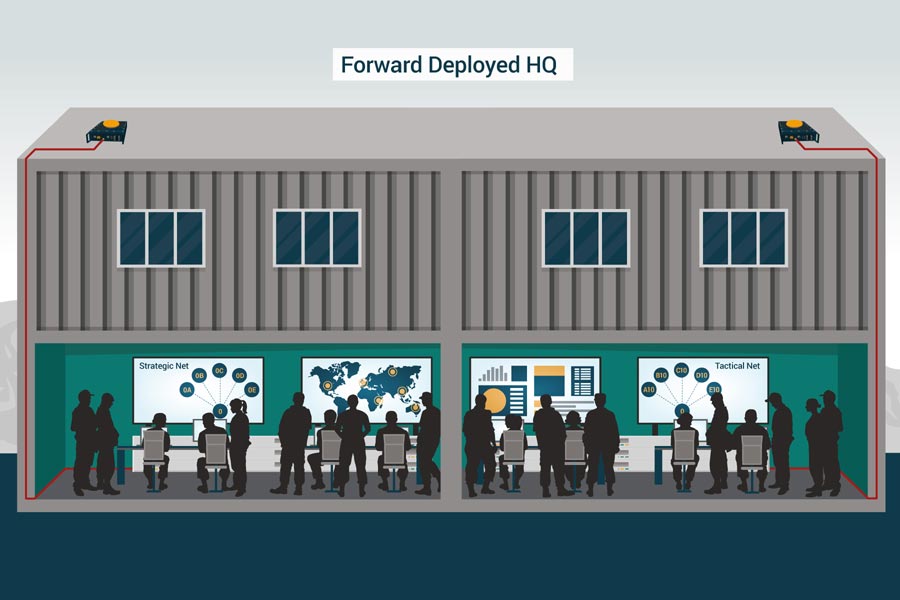 STOCS is a specially designed and modified version of SlingShot that allows the user to communicate Beyond Line Of Sight (BLOS) while being up to 35 metres from the antenna. Because it operates on L-Band, the current configuration limits the current SlingShot system to being operated at a remote distance of up to 10 metres (depending on system type) from the antenna, which in most operational scenarios is sufficient, for example, in a vehicle or when dismounted. However, in response to customer requests, the new STOCS variant of SlingShot enables the user to now operate in more enclosed locations such as a command HQ, a tactical operations room, any type of building, a protected bunker or when dug in. In all scenarios, by placing the antenna away from the operator they can remain in cover whilst still effectively communicating via the satellite. The STOCS hardware has been ruggedised and weatherproofed (IP67) to enable the user to leave it in a more exposed position, such as a rooftop, without any risk to the electronics.

Simon Davies, CEO of Spectra Group said: “the launch of the new STOCS product enhances our offering and adds significant additional capability to the user. Effective communication is a fundamental part of command and control centre operations so being able to use SlingShot in these scenarios is a game changer for global special forces and other defence and security units or organisations”. He added: “here at Spectra Group we’re very focused on innovation and we’re constantly working to evolve and enhance our product and service offering. The addition of STOCS to our product line is a great example of that. We’ve listened to what our customers need and developed STOCS to deliver the required capability enhancements”.