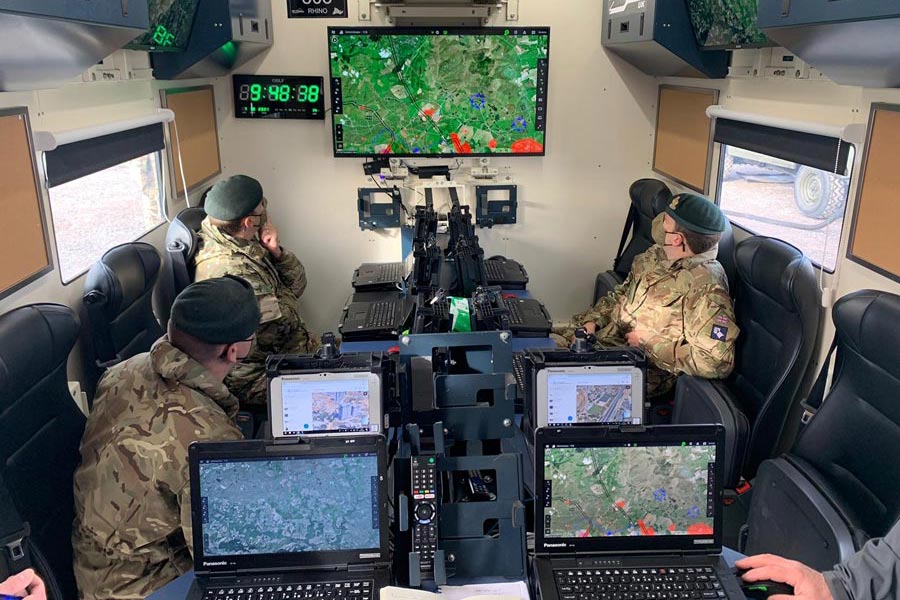 Press Release, London, 21 October 2020: Elbit Systems UK has completed a series of live, cross-scenario demonstrations of its battlefield capabilities as part of the British Army’s Warfighting Experiment (AWE) that took place on Salisbury Plain between 5-20 October.

The overarching theme of this year’s AWE – ‘Agile Command, Control and Communication’ (C3) – saw Elbit Systems showcase technology that provides a network of sensors, effectors and deciders as ‘digital backbone’ to modern operations. Agile C3 is acknowledged by the UK Ministry of Defence as a key aspect of guiding strategic, joint and command force development.

Elbit Systems’ RHINO Protected Command and Control Centre, a mobile HQ facility, demonstrated advanced digital communications technology alongside the TORCH-X based STRIKE Battle Management System. This enabled the company to show the potential of its next-generation multi-domain combat networks, allowing any data from any sensor to reach any effector via any network. Also in action was the company’s TacCIS Waveform radios, based on the ElynX secured software defined radio family. The radio network capabilities and resilience were deployed across six scenarios, including urban assault.

Elbit Systems also demonstrated its WideBridge app which serves as an Emergency Services Network in times of crisis, and has been used as part of the COVID response by Rambam Hospital in Israel.

These systems were showcased to a number of senior military and government personnel, including the Secretary of State for Defence, Ben Wallace.

Martin Fausset, CEO of Elbit Systems UK said: “The Army Warfighting Experiment is a valuable opportunity for collaboration between industry and the military community. This year, Elbit Systems UK was able to take part in wide-ranging discussions and demonstrations, combining our pioneering technology, with the expertise and proficiency of UK Armed Forces personnel. Working in this way together we can propel the development of UK defence capabilities, helping the British Army to effectively utilise developments in C4I technology, and to experiment with open and agile Command, Control and Communication systems.”