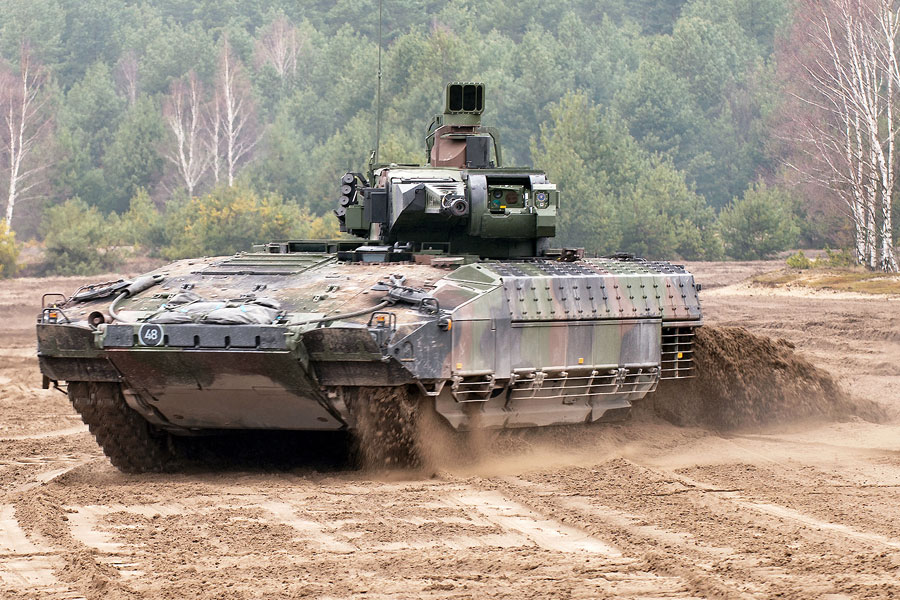 MUSS 2.0 will be available for the second lot of the PUMA IFV [©PSM via Hensoldt]

HENSOLDT has further developed its MUSS self-protection system for the PUMA IFV ~ MUSS 2.0 offers a number of improvements.

Press Release, Taufkirchen, 02 September 2020: “We have fundamentally revised and repositioned our technology,” explained Dr Oliver Rudow, Head of Business Line Countermeasures & Ground Protection Systems. The Multifunctional Self-Protection System (MUSS) is a soft kill-based active protection system (APS). It offers infantry fighting vehicles and main battle tanks efficient protection against enemy laser and armour-piercing threats. These can be effectively countered by warning sensors that detect the threat from missiles or lasers and initiate appropriate countermeasures. The MUSS self-protection system is already in series production and has so far been delivered more than 350 times.

The improvements include a new laser detector that covers all modern laser threats. MUSS 2.0 now offers improved and extended sensor technology, significantly improved software and modern countermeasures. MUSS is being further developed into a layered system and offers modern interfaces, which, among other things, enable the integration of a hard kill effector. “In addition, MUSS 2.0 will be even smaller and lighter than before”, said Dr Oliver Rudow.

“Our MUSS is a popular solution in Germany, but we are also in discussion with armed forces in a number of other regions,” says Franck Friedlander, Sales Director Self-Protection at HENSOLDT. “In order to achieve our ambitious goals, we are expanding our highly qualified team across locations.” The new system will be available for the upcoming second lot of PUMA and similar platforms.