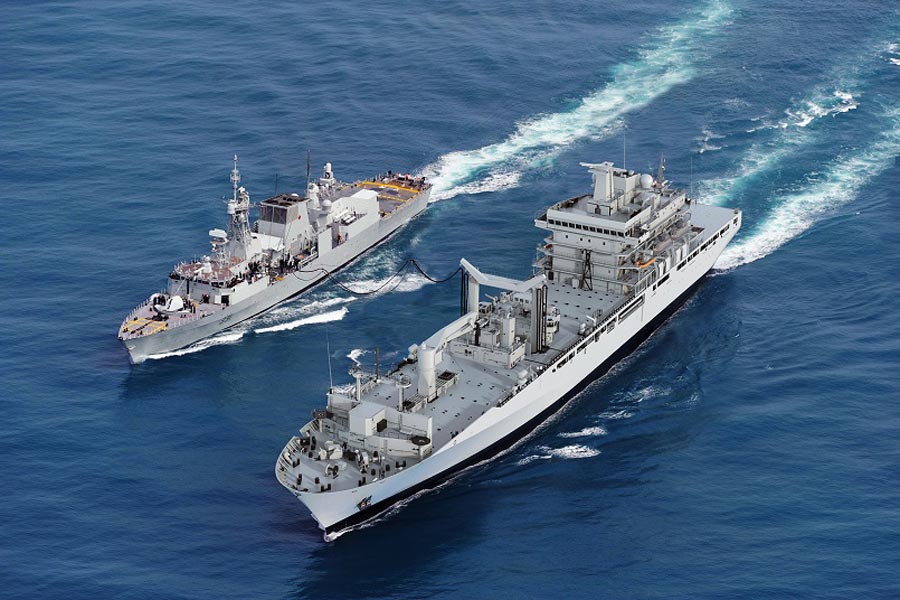 The Government of Canada has highlighted a recent contract for the construction of two Protecteur-class Joint Support Ships for the Royal Canadian Navy.

Today, Defence Minister Harjit S. Sajjan, joined by the Honourable Johnathan Wilkinson, Member of Parliament for North Vancouver, Terry Beech, Member of Parliament for Burnaby North—Seymour, and John McCarthy, Chief Program Officer of Seaspan Vancouver Shipyards, highlighted the importance of the recent contract award for the full construction of Canada’s two new Joint Support Ships (JSS) to both the RCN and to the Canadian economy. Valued at $2.4 billion (including taxes), this contract supports the ongoing construction of the ship’s early blocks, which began in June 2018, as well as construction of the newly designed blocks for the remainder of the ships.

By investing the entire value of the contract in to the Canadian economy, work on these ships will create an estimated 1,000 jobs across Canada. The work being done by Seaspan, its hard working employees and workers from companies across Canada will make sure that the RCN is well equipped for the future by being able to provide at-sea replenishment and supporting critical humanitarian and disaster-relief missions, both at home and abroad.

The first new JSS, the future HMCS Protecteur, is expected to be delivered in 2023, followed by the second JSS, HMCS Preserver, in 2025. This contract award is bringing the RCN one step closer to the arrival of its future fleet of ships. Built through the National Shipbuilding Strategy, the new JSS will replace the RCN’s former Protecteur-class Auxiliary Oiler Replenishment vessels, which were retired from service in 2014.

“By investing right here at home, Canadian workers are helping to build the fleet of the future to equip the Royal Canadian Navy and our members in uniform with modern and versatile ships they need for Canada’s important contributions to peace and security at home, and abroad. This work will create about a 1,000 jobs right here in Vancouver and across Canada, supporting local economies from coast to coast. Today, we are one step closer to an exciting new chapter in Canada’s proud naval history.” The Honourable Harjit S. Sajjan, Minister of National Defence

“Through the National Shipbuilding Strategy, we are honouring our commitment to equip the Royal Canadian Navy with the critical equipment they need, while supporting Canadian jobs. The dedicated team at Seaspan has already made good progress on the Joint Support Ships project. This contract award brings us one step closer to delivering these world-class vessels to the Royal Canadian Navy.” The Honourable Anita Anand, Minister of Public Services and Procurement

“The National Shipbuilding Strategy is generating more jobs and strengthening our domestic shipbuilding industry, while growing Canada’s economy. As we navigate this unprecedented time, it is reassuring that through this contract the workers at Seaspan and their suppliers will have good opportunities and lasting jobs.” The Honourable Navdeep Bains, Minister of Innovation, Science and Industry

“I am pleased to see yet another milestone happen this year for our future Joint Support Ships. With these warships, the Royal Canadian Navy will be able to operate with even greater flexibility and endurance. Not only will these ships form part of the core of our Naval Task Groups, they represent a vital and strategic national asset which will enable the Navy to maintain its global reach and staying power.” Vice-Admiral Art McDonald, Commander of the Royal Canadian Navy

“Today’s event honours our Government’s commitment to strengthening our shipbuilding industry, and equipping our sailors with state of the art equipment they need to keep Canadians safe. It will also create good local jobs for people right here in North Vancouver. This is a tangible investment in our community, and I look forward to seeing the ongoing progress and future results of these two new Joint Support Ships.” The Honourable Jonathan Wilkinson, Minister of Environment and Climate Change, Member of Parliament for North Vancouver.