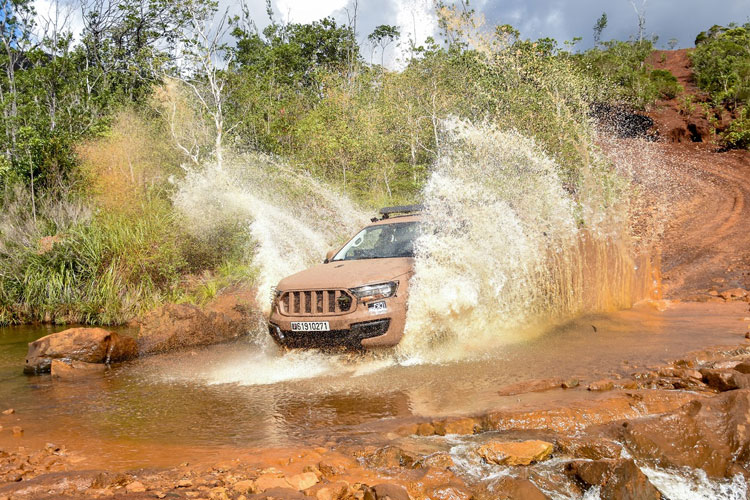 Press Release, 16 June 2020: On June 11, 2020, the Direction Générale de l’Armement (DGA, French Procurement Agency) has received the eighth batch of the VT4 Mk2 vehicle on the ARQUUS plant in Saint-Nazaire.

Including this new batch, 300 VT4 vehicles have been delivered in 2020. As the first batch of vehicles delivered since the official restart of the production activities in Saint-Nazaire, it illustrates ARQUUS’ quick ramping up, as well as its determination to abide by the scheduled delivery planning.

During the COVID-19 sanitary crisis, the deliveries of VT4 vehicles have been continued thanks to a dedicated team on-site, tasked with finishing works and handing over the vehicles to the DGA. That team notably delivered two 100-vehicles batches during the worst weeks of the crisis, at the end of March 2020. These vehicles have thus been handed to the armies, in liaison with the SIMMT (Structure Intégrée du Maintien en condition opérationnelle des Matériels Terrestres, the structure in charge of the maintenance of all the Army equipment), reinforcing the fleets available for domestic operations.

Launched on April 3, the resumption of on-site work has been conducted step by step. About ten collaborators resumed work every day in Saint-Nazaire, in order for each to receive a full training on the new protocols and thus ensure everyone’s safety. This process has now been completed and the plant has almost recovered nominal production capabilities, as 250 collaborators are back. On top of the production of the VT4, Saint-Nazaire is currently in charge of Industrial Repair Works of TRM2000 trucks for the French Army. These restarting efforts now fully pay off. The Régiment d’Infanterie de Marine du Pacifique – Nouvelle Calédonie (RIMaP-NC, a French Infantry Regiment posted in the Pacific), has recently received 30 VT4 vehicles, as well as 15 renovated TRM2000 trucks. The VT4 is now ubiquitous in the French forces, including overseas France.

The latest batches of VT4 vehicles take into account the feedback collected on the field since 2018 in order to guarantee a very high level of maturity. The VT4 Standard 2 is a proven, accomplished vehicle, appreciated by all units for its comfort, mobility, security and modernity. In total, 1,300 VT4 vehicles in all configurations have now been delivered to the forces since the very first presentations to the 12e Régiment de Cuirassiers (12th Cuirassiers, based in Olivet). 4,380 VT4 should equip the armies, 3,080 of which are still to be produced in Saint-Nazaire. 3,980 VT4 will be delivered to the Army, and the remaining vehicles will serve in the Armée de l’Air (Air Force), the Marine Nationale (Navy), the Service des Essences des Armées (Military Fuel Service) and the Service Interarmées des Munitions (Ammunition Service).

The VT4 is a light 4×4 vehicle designed for command and liaison. It can accommodate a crew of five or four FELIN-equipped soldiers. It is thought for domestic operations (SENTINELLE operation, training) or foreign deployments in low-intensity conflict zones. The VT4 Standard 2 includes 350 new references and presents several new evolutions: integration of communication, positioning and navigation systems, extra roof rack, towing bar and blackout lights. The VT4 Standard 2 is also designed to be air transportable, which increases its tactical mobility capabilities. The VT4 programme includes a full package of integrated services, provided by ARQUUS, with a firm commitment on uptime for the whole fleet.

4x4, ARQUUS, Featured, Saint-Nazaire, VT4
You may also like