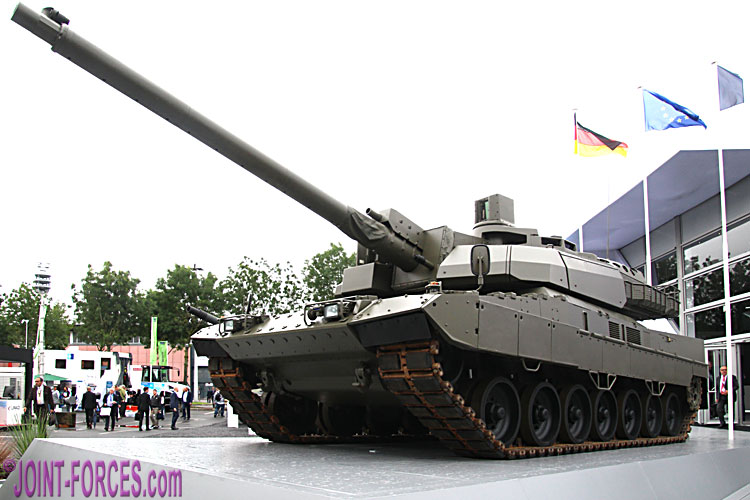 The E-MBT demonstrator, unveiled at Eurosatory 2018, produced by the KNDS partnership of Germany’s KMW and France’s Nexter mates a French Leclerc turret to a German Leopard 2 hull [©Bob Morrison]

Joint Press Release, Munich / Versailles / Düsseldorf, 20 May 2020: Standing for Main Ground Combat System, MGCS is a joint Franco-German defence project. The programme, to be implemented under German political leadership, is tasked with developing a main combat system to succeed the Bundeswehr’s Leopard 2 and the French Army’s Leclerc starting in 2035.

Making the start of the MGCS procurement programme Krauss-Maffei Wegmann (KMW), Nexter Systems and Rheinmetall AG established an ARGE in December 2019. Now, the partners and the German Federal Office of Bundeswehr Equipment, Information Technology and In-Service Support (BAAINBw), acting in the name of Germany and France, have signed a contract for the ‘System Architecture Definition Study – Part 1’ (SADS Part 1). This contract sounds the industrial starting gun for a MGCS Demonstration Phase.

At the Franco-German Ministerial Council meeting in Toulouse on 16 October 2019, the defence ministers of both nations, Florence Parly and Annegret Kramp-Karrenbauer, emphasized their commitment to developing the MGCS.

The ARGE is a German acronym standing for Arbeitsgemeinschaft, or ‘working group’. Under German law, the ARGE serves as the contractual partner of the procurement authority (BAAINBw) during the first phase of the programme. Officials of the three companies represent the ARGE vis-à-vis third parties.

The aim of the study is to harmonise the final MGCS concepts of the previous phase, to analyse further details, and to propose a common multi-platform architecture. The three contractual partners will assess various aspects of different concepts: technical feasibility in the projected time frame allotted for the programme; ability to fulfil the operational needs of both armies; efficiency and compatibility with national ‘systems of systems’ (SCORPION for France and Digitization of Land-Based Operations (D-LBO) for Germany). Work shares in the SADS Part 1 are to be distributed equally between France and Germany on a fifty-fifty basis. The first phase of architecture work is expected to last 18 months.