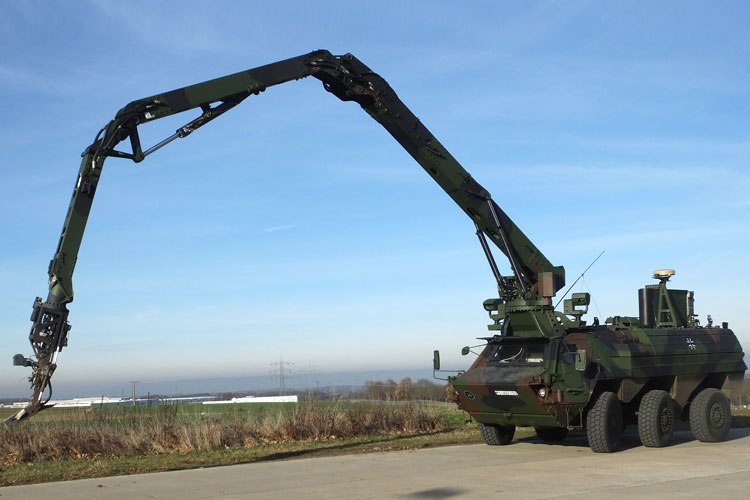 A quantum leap in force protection – Rheinmetall is supplying the Bundeswehr with Fuchs armoured transport vehicles configured for the EOD role.

Specially configured for an EOD role, this new variant of the Fuchs / Fox 1A8 armoured transport vehicle – known as the KAI – represents a quantum leap in the German military’s ability to detect and identify unexploded ordnance and similar battlefield hazards. Thanks to its high-performance electronics and a precise, multi-jointed, versatile manipulator arm featuring state-of-the-art sensors, Bundeswehr bomb disposal experts will now be able to reconnoitre, mark, expose and identify suspicious objects from a safe distance. Delivery of these serially produced systems is already underway, and slated to be complete in 2020. The order is worth a figure in the mid-double-digit million-euro range.

The Fuchs / Fox KAI reinforces the Bundeswehr’s array of heavy-duty EOD vehicles, and is designed to investigate vulnerable points which the Route Clearance System – partially supplied by Rheinmetall as well – cannot reach. Furthermore, the KAI is intended to serve as a stand-alone system capable of operating without the Route Clearance System in a convoy support role.

The carrier vehicle for the KAI is the latest iteration of the 1A8 version of this tried-and-tested armoured transport vehicle. Extremely well protected from mine and IED blasts, it is equipped with advanced force protection elements and mine-resistant seats that the keep the crew’s feet safely off the floor of the hull. The most prominent feature of the Fuchs / Fox KAI is the aforementioned multi-jointed, high-precision manipulator arm, with a maximum operating reach of over ten metres and a load-carrying capacity of 400 kg. This enables EOD personnel operating in the Fuchs / Fox fighting compartment to investigate suspicious locations and to examine and identify ordnance and booby traps with great precision from a safe standoff.

Besides the basic tool, the manipulator can accommodate two other tools. One of these is a dual sensor, the 80-centimetre variant employed by the Route Clearance System. It can be used for investigating suspicious spots and determining whether ordnance has been buried there. In addition, there is also a tool camera. Mounted on a tilt-and-pan head, this device can optically examine hard-to-view places such as drainage pipes, the sides and undersides of bridges or locations behind walls in order for example to detect the presence of an explosive device. To enable visual reconnaissance, the system features high-performance optronic technology. An optronic wiping-and-washing system makes it possible to quickly clean the reconnaissance camera during an ongoing operation. This significantly boosts the system’s tactical flexibility.

Other core elements of the KAI are its water-air spade system, with a maximum operating pressure of 400 bar, and a ripper chisel. This enables the EOD crew to uncover suspicious objects which cannot be clearly identified. Marking can be done digitally either in the system by means of exact GPS coordinates, or with an optical marking device for the dismounted bomb disposal engineer. Moreover, the manipulator arm can be mounted with a recovery system for removing persons from a danger zone.

Rheinmetall is the German military’s partner of choice for combat engineering equipment. Other products in this segment include a share in the already mentioned Route Clearance System, the Dachs / Badger Armoured Engineering Vehicle 2, the Keiler armoured mine-clearing vehicle, and multiple variants of the Fuchs / Fox armoured transport vehicle. 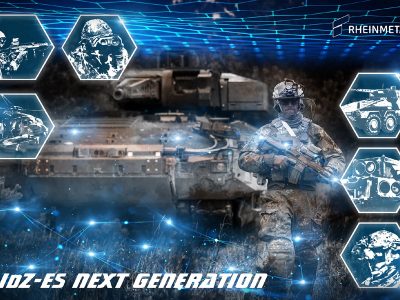