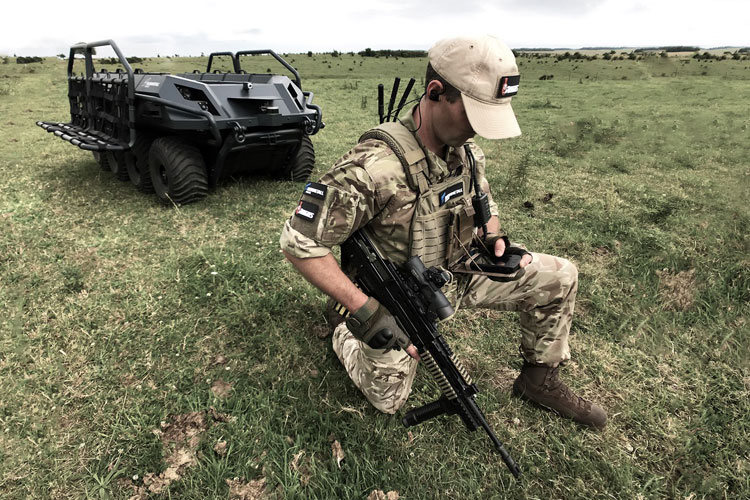 Press Release, 27 February 2020: Rheinmetall is pleased to announce the launch of its first Australian research and technology programme. Under the Autonomous Combat Warrior (ACW) programme, Rheinmetall’s Australian, German and Canadian development teams will work alongside research teams from Defence Science and Technology (DST) group, the Commonwealth Scientific and Industrial Research Organisation (CSIRO), Queensland University of Technology (QUT) and the Royal Melbourne Institute of Technology (RMIT). The aim is to develop advanced sovereign robotics and automated vehicle technologies. This will create a local automated military vehicle capability.

Rheinmetall Defence Australia Managing Director Gary Stewart said the programme would lead the Australian development of next generation automated combat vehicle technologies for integration into the family of Rheinmetall vehicle platforms. “ACW’s goal is to fundamentally change the way in which land vehicles support military operations by transforming a vehicle from tool to teammate to provide currently unachievable levels of soldier protection, support and tactical advantage,” Mr Stewart said. “This will see the Australian development of the next generation of land vehicle systems warfighting capability, with an emphasis on developing trusted automated systems which provide human-machine teaming and optional crewed control.”

The programme will focus on the automation of driving capabilities. Rheinmetall only develops systems that are strictly compliant with the rules of engagement of its customers. Rheinmetall does not develop, manufacture or market fully autonomous weapon systems. Rather, Rheinmetall is convinced that humans must retain the power of decision and therefore rejects fully autonomous weapon systems that deprive humans of the power to decide whether or not to use weapons against other humans.

Rheinmetall’s contribution to the programme will take place across its Australian, Canadian and German businesses with the focus of research to take place at the company’s Melbourne operations and its new Military Vehicle Centre of Excellence in Redbank, Queensland which is due for completion in the second half of 2020.

Rheinmetall Defence Australia is working with the DST Group under a 5-year strategic R&D alliance agreement to work collaboratively to advance automated vehicle systems. The agreement builds on Rheinmetall’s longstanding relationship with DST in the area of simulation and augmented reality. The partnership also includes R&D around novel concepts and technologies that support the new Boxer 8×8 Combat Reconnaissance Vehicle capability Rheinmetall is delivering to the Australian Defence Force under the $5.2 billion Land 400 Phase 2 programme.

Rheinmetall Landsysteme Germany has over twenty years of experience in the automation of vehicles. Its system safety and system architecture competencies derive from more than ten research projects, and relevant technologies such as drive-by-wire have been developed to a uniquely high level of maturity. This underscores Rheinmetall’s status as a leader in automation technologies.

Rheinmetall is also upgrading two Wiesel 2 digital vehicles with drive-by-wire architecture and the Rheinmetall Canada autonomous driving A-Kit package. These vehicles, when upgraded with Australian advanced autonomous applied research under the ACW Programme, will be used to demonstrate the vehicle-agnostic and integrated payload capabilities of Rheinmetall’s Advanced A-Kit.

ACW’s research and development objectives are to: