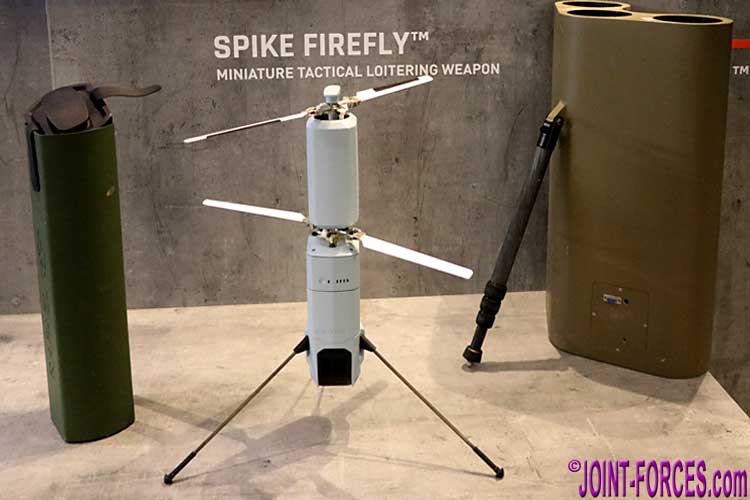 A new system which caught the attention of many visitors to this week’s International Armoured Vehicles 2020 conference was the Rafael SPIKE FIREFLY Munition, reports Bob Morrison.

Originally conceived as a small Unmanned Aerial Vehicle able to provide BLOS (Beyond Line Of Sight) vision for armoured vehicle crews operating in urban or built-up areas where ambush by insurgents with anti-armour weaponry is a high threat, the Rafael FIREFLY has evolved into a miniature tactical loitering weapon offering behind-cover precision attack capabilities for the dismounted fire team or even the individual soldier.

In the reconnaissance role the FIREFLY would normally operate with two battery pods which give 30 minutes of flying time, but by swapping an explosive charge for one battery and reducing flight range to 15 minutes, this intelligence asset can now be transformed into a deadly weapon which is even capable of flying up to a window opening and taking out any serious threat spotted inside the building by the operator viewing the onboard camera. When the system is vehicle-mounted FIREFLY is transported in a triple launcher outside, controlled by the operator under full armoured protection inside, but for dismounted use a soldier can carry the 3kg killer drone in his or her daysack and fly it using a simple tablet.

The Rafael video below, which was seen at IAV 2020 by military delegations from as far afield as South America and Japan, both during formal conference sessions and on the manufacturer’s exhibition stand, gives a good impression of how the system can be used. Some of the clips were shot during capability validation exercises and the system has now been procured by one nation with others having expressed serious interest.

The FIREFLY weapon system kit includes three Loitering Munitions and a Control Unit based on a ruggedised tablet with a military standard bidirectional data link.

FIREFLY was designed for the dismounted soldier fighting within the urban arena where situation awareness is limited, the enemy is behind cover, and precision is critical. The impact of FIREFLY on the infantry is revolutionary, fundamentally changing small infantry tactics.

FIREFLY, also known as SPIKE-FIREFLY, is a new variant of Rafael’s SPIKE Family Precision Guided Missiles. As such, FIREFLY features a dual seeker, target tracker, homing algorithms, computer vision, Safe & Arm fusing mechanisms, and HMI (Human-Machine Interface). These features served as a basis for the development of FIREFLY and the tailoring of the weapon system to its unique mission profile of urban combat.

FIREFLY weighs only 3kg, is rapidly deployed, and enables the attack of Beyond Line of Sight (BLOS) targets commonly found in urban combat. FIREFLY will essentially eliminate the value of cover and with it, the necessity of long-drawn-out firefights. It will also make obsolete the old infantry tactic of firing and manoeuvring to eliminate an enemy hiding behind cover.