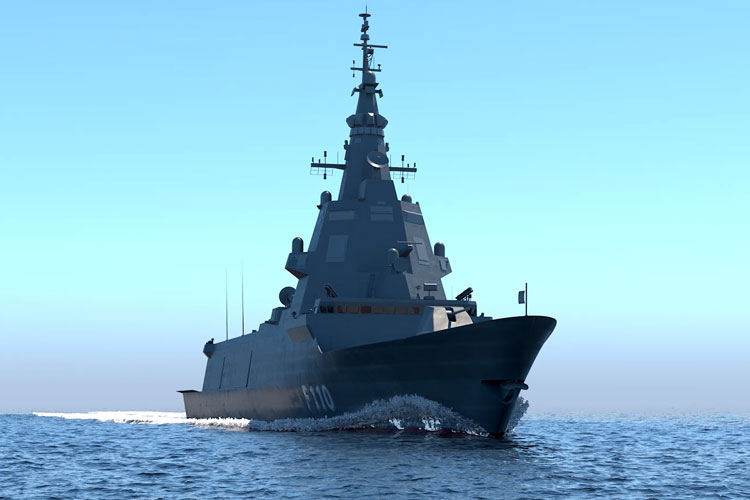 Indra has signed a contract for over 150 million Euros with Lockheed Martin to manufacture the digital AESA S-band radar for the Spanish Navy F110 frigates.

Press Release, Madrid, 12 December 2019: Indra has signed a contract with the US company Lockheed Martin to supply the main components of the AESA (Active Electronically scanned Arrays) S-band anti-air warfare radar antenna of the future F110, one of the sensors that will make this frigate one of the most advanced of its kind in the world. The value of the contract amounts to over €150 million and will last for 7 years.

Lockheed Martin’s Vice President & General Manager of the Integrated Warfare Systems and Sensors line of business, Paul Lemmo, and Indra’s Executive Director of Transportation and Defence, Ignacio Mataix, sealed the agreement at an event held at Navantia’s headquarters in Madrid, Spain. The signing of the agreement was immediately preceded by the signature of Lockheed Martin’s contract with Navantia to equip the Spanish Navy’s five F110 frigates with S-band radars, as well as the Integrated Ground Systems Center (CIST) in which the system will be tested.

This subcontract signed with Indra is within the framework of Lockheed Martin’s S-band Radar contract and will supply the critical elements to support the digital transmission and reception of each of the radars elements. This is the first of the contracts that Indra expects to be awarded during the construction phase of the five frigates to equip them with the sensors that their built-in mast carries.

The S-band anti-air warfare radar is one of the ship’s key sensors and will give it supremacy and a dominant edge in combat. It is a fully digitised system composed of hundreds of small independent blocks or tiles. Its flat facets laid out around the mast minimise the ship’s radar profile. Thanks to these digital tiles, this system will be able to operate as if it had several radars working simultaneously, which gives it its multitasking capability. It may, for example, operate as a long-range radar and integrate missile control, as well as setting tracking on multiple targets.

First Naval Division: The combat system, sensors and electronic defence systems that equip a naval vessel constitute an increasing percentage in the construction of military ships. Indra leads the development within the F110 Program of some of the most advanced sensors that will be available in the international market in the coming years. In addition to the aforementioned tiles for the S-band radar, Indra is developing:

Indra is positioned as one of the companies best suited to meet the needs of the most modern navies in the world, which are interested in acquiring new frigates with the operational capabilities needed to face new threats at a competitive price. Indra is a company that provides systems to the world’s leading shipbuilders. More than a hundred naval ships from all five continents use its technology in the most demanding missions.