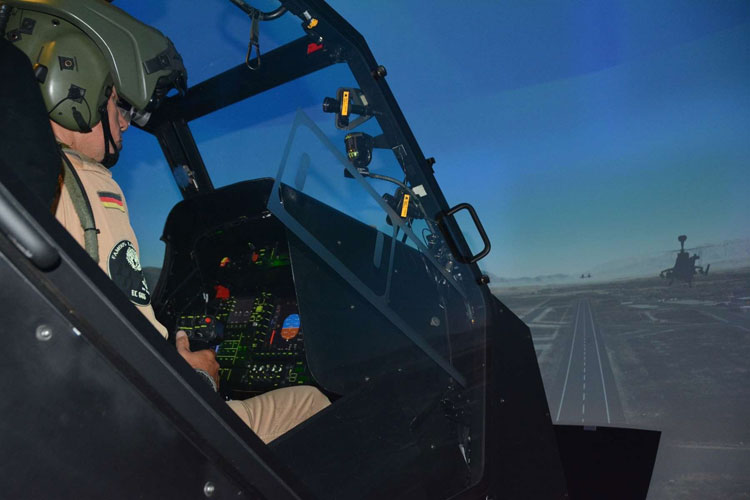 Rheinmetall has announced the successful conclusion of the modernisation of simulators for Tiger/Tigre combat helicopter for the French and German Armed Forces.

Press Release, Düsseldorf, 12 November 2019: In partnership with Thales, Rheinmetall successfully completed modernisation of the flight simulators for the Tiger combat helicopter just a few weeks ago. The contract was awarded to ARGE TATM (consisting of Rheinmetall Electronics GmbH and Thales AVS France SAS) in December 2014 through the Organisation Conjointe de Coopération en Matière d’Armement (OCCAR), an organization that fosters cross-border defence procurement cooperation in Europe. With the completion of this programme, French and German armed forces are now able to train their crews in a state-of-the-art virtual environment that ensures full-mission readiness and strengthens flight safety.

For Rheinmetall Electronics and its partners, the contract to modernise the simulators in Le Luc, Fritzlar and Pau meant modifying them to match current configurations of the original aircraft: the Tiger Hélicoptère d’Appui et Destruction (HAD) Block 2 (France) and Kampfhubschrauber Tiger UHT Step 2 Krypto (Germany). In addition, two new simulators were installed in Phalsbourg, France in a record 10-month timeframe, bridging a training capability gap for the French 1st Helicopter Regiment. Now that the modernisation programme is complete, a total of twenty flight simulators are in operation at various locations: eight full-mission simulators (FMS) and twelve cockpit procedure simulators (CPT).

The contract encompassed modernisation of the software for the basic management system, the updated ETCM navigation system and the mission equipment systems, together with new cockpit hardware. Other measures included integration of the German Operational Support System (OSS), into the simulator for mission preparation and tactical training, coupled with modernisation of the existing simulator technology by means of a new visual system, new visual data bases, new projectors for the display systems, and the replacement of obsolete computer technology. The upgrade process culminated in a binational joint exercise at the École Franco-Allemande (EFA, binational school for aircrew training) in Le Luc, involving six simulated helicopters in twelve networked simulators.

Tiger simulators number among the world’s top-performing full-mission simulators for attack helicopters. The multipurpose Tiger combat helicopter is a highly sophisticated weapon system whose replication in a simulator makes immense demands on both hardware and software. At the school in Le Luc, the focus is on flight and weapons training, while in Fritzlar, Pau and Phalsbourg, the primary emphasis is on tactics.
Cooperation between Rheinmetall Electronics GmbH and Thales AVS France SAS continues with ongoing support of the twenty upgraded Tiger simulators.