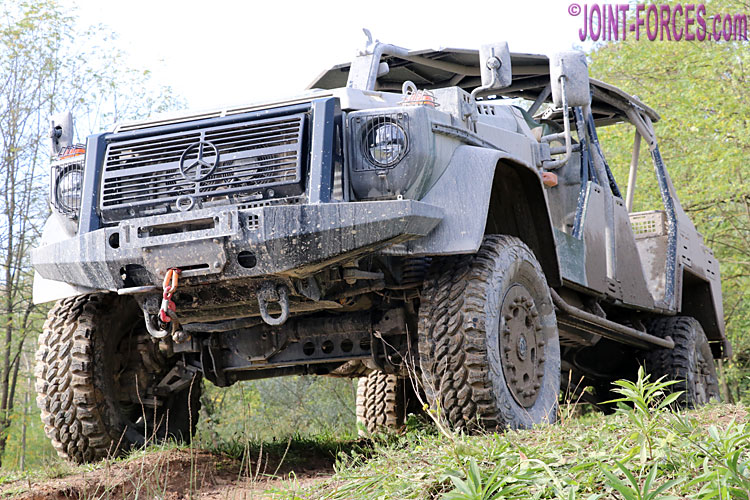 At the recent Mercedes-Benz Defence Vehicles Experience, DVE 2019, we were given our first chance to see how the new G 300 CDI MRV performs off-road, reports Bob Morrison.

The new G-Class (formerly Geländewagen) Multi-Role Vehicle (MRV) was not the star of the show, as that honour went to the New Generation Zetros truck in military configuration, but we suspect that as this new G-wagen has only previously appeared in public on static display at defence expos the accompanying photos of this vehicle might be of more interest to our rank and file viewers.

The MRV prototype first popped up on our radar at Eurosatory 2018 in Paris, where it was displayed with weapons mounts but no actual weapons. It was obvious from the high sit that this vehicle had more in common with the LAPV (Light Armoured Patrol Vehicle) 6.1 model, which has portal axles, than the conventional Geländewagen or G-wagen models which Mercedes-Benz now call their G-Class. Using portal axles, in the past more usually associated with the Steyr-Daimler-Puch Pinzgauer, gives the MRV greater ground clearance and consequently better off-road capability; an asset that Special Operations Forces, who often operate deep behind enemy lines and away from main communication routes, value highly.

The official DVE 2019 Press Release states: “ On the basis of the highly mobile LAPV 6.1 chassis Mercedes-Benz has realised an open vehicle for Special Forces with mine protection and waist-height ballistic protection. The vehicle is open at the top and can be equipped to perform a wide variety of Special Forces tasks. Thanks to the omission of the protected roof the available space can be used for a higher payload. The unique space concept makes it possible to integrate a stretcher in order to rescue casualties quickly from direct danger zones in MedEvac (Medical Evacuations) tasks. Alternatively the vehicle can be equipped with seats for up to six soldiers including their equipment. The remaining loading possibility for equipment, machinery and care items also makes longer patrol operations possible.

“With a top speed of over 120 km/h and a ground clearance of 412 mm the MRV with its portal axles is a high-performance vehicle for diverse tactical operations and is impressive in all the relevant application segments: the optimum balance of better agility, more payload and high protection. The frame concept and the drivetrain are based on the tried-and-tested components of the Mercedes-Benz G-Class. This means logistical similarities and in turn the MRV can be maintained using the Mercedes-Benz Service network.”

Above: MRV can accommodate six but this prototype was configured for just four [©BM]

From unclassified published sources it can be determined that four, and possibly five, NATO nations have a firm requirement for this type of lightweight patrol vehicle. Unfortunately contractual clauses prevent Mercedes-Benz from discussing precisely who they are in dialogue with but one does not need a Doctorate in Quantum Physics to work out that the Geländewagen-based AGF Serval fleet used by Germany’s elite KSK has hit its original Out of Service Date and the G-Class MRV looks to be one of a very small number of capable replacement vehicles currently available. A bit closer to home, the Royal Marines are looking for a replacement for the updated 20-year old WMIK Land Rovers which they first deployed operationally to Sierra Leone on Op PALLISER in May 2000, and if budget were available the MRV could be just what they need.

No specification sheet for the MRV is available, but as it is based on the G-Class 6.1 model we can safely presume that the basic details are similar. Homologated as a Commercial Vehicle (unlike the now out of production original Land Rover Defender, which was classified Private Light Goods and therefore had to comply with car and van construction & use regulations) the MRV has a ladder chassis. It is powered by a six-cylinder G280 CDI diesel engine developing 135kW at 3,800rpm, through a five-speed automatic gearbox, and has a potential top road speed of 140km/hr. As the GVW for the 6.1 model is 6,100kg and the MRV, although offering some ballistic protection, does not have a heavy armoured body it is probably safe to say that payload is well in excess of 2,000kg even with up to six troops and weapons onboard. A braked 2,000kg trailer can also be towed, though it is unlikely that SpecOps units would use this capability. Approach and Departure Angles are 45° and 42° respectively, Ground Clearance is 412mm, Fording Depth is 800mm unprepared, and slope climbing ability is 60% (which we witnessed at the Unimog Test Facility).

Above: Demonstration of off-road capabilities [©BM]

The company test drivers who drove invited guests, most of whom were military, around the off-road test track near Karlsruhe demonstrated the vehicle’s high speed capability over rough ground (which was impressive) but although this aspect of its performance would quite possibly be required when raiding and bugging out, I would have liked to have been able to see more of its rock-crawling and axle-twisting abilities as slow & stealthy is possibly more appropriate for the intended end-users. Having said that, from what little I did see of the MRV tackling obstacles it certainly looked every bit as capable as its older siblings and I suspect it is actually much better.