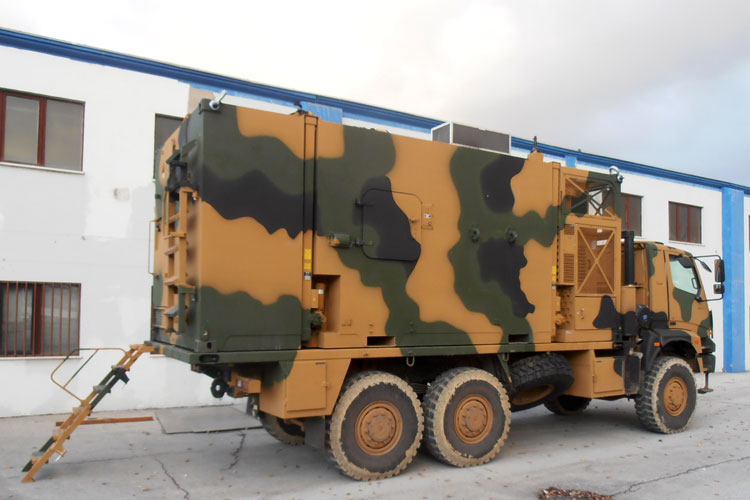 It has today been announced that Indra is to supply the Spanish Army with a cutting-edge portable CBRN laboratory to face chemical attacks.

Press Release, Madrid, 07 November 2019: Indra will supply the Spanish Army with an advanced portable chemical laboratory ready to be deployed rapidly in the operation zone, in order to identify the chemical warfare agents and toxic industrial chemicals that the enemy may be using.

Indra’s laboratory will boost the operational capacities of the first CBRN Defence Regiment ‘Valencia’. The command centre’s decision-making during deployment will depend on the promptness and efficiency of the agent identification process. Until now, this regiment had VAMTAC (high mobility tactical vehicle), BMR 6×6 (armoured carrier) Reconnaissance Vehicles and the Sampling and Identification of Biological, Chemical and Radiological Agents (SIBCRA) team that collects samples in a contaminated area and sends them to a lab for subsequent analysis. Now they can deploy an entire laboratory in the operation zone and immediately take delivery of the samples in order for the specialists to work on site in the safest way, with the most advanced identification equipment. This will help save time and make their work more effective.

Identifying these chemical agents is the first step towards responding appropriately in the event of incidents of this type. This also entails the strategic capability to track prohibited chemical weapons used against the civilian population during conflict. The lab is composed of a 20-foot or 6 metres container that houses the work area and a backup equipped with HVAC, CBRN air and water tank filtration, non-interruptible power supply, a diesel generator and storage for collected materials. To take delivery of samples and prepare them, operators have a handling booth isolated from the rest of the lab. It also has a communication system that sends the results immediately to the command centre.

All of the analysis equipment is completely compatible with that currently used by the Institute of Technology located in La Marañosa. Both labs can work as a backup for each other if results need to be collated. Indra’s laboratory enables us to identify chemical warfare agents and toxic industrial chemicals, in compliance with international NATO standards for facilities of this kind (STANAG 4632).

European Leader in CBRN and Counter-IED Laboratories and Systems: This contract establishes Indra as the trusted technology provider for the Spanish Army in CBRNe (Chemical, biological, radiological, nuclear and explosives) defence and identification solutions. Moreover, Indra is the leading European company in the development of this type of equipment and technology, as well as one of the pre-eminent companies worldwide.

In the field of counter-IED (Improvised Explosive Devices) – some of the weapons most used by terrorist groups and the cause of most casualties during conflict – Indra was the provider of the laboratory used by NATO countries during the Afghanistan conflict between 2011 and 2014. Subsequently, it provided the international training centre of the European Defence Agency (EDA) in Soesterberg (the Netherlands) with two portable forensic laboratories designed to train the best military specialists on the continent and prepared to deploy in the operation zone if necessary. Indra’s excellence in this field led the Australian Army to entrust the company with the development of a first-class laboratory with the same characteristics.

Likewise, Indra has participated in the most ambitious European R&D projects launched to date for the detection of triggered explosives, using various pioneering techniques. It has developed a CBRN reconnaissance vehicle, called AREVE (Advanced Reconnaissance Vehicle) that discreetly transports in a conventional van the most powerful equipment in order to respond to civil emergencies. In the field of scientific research, it has provided the University of Granada with a top tier biosafety level III laboratory.