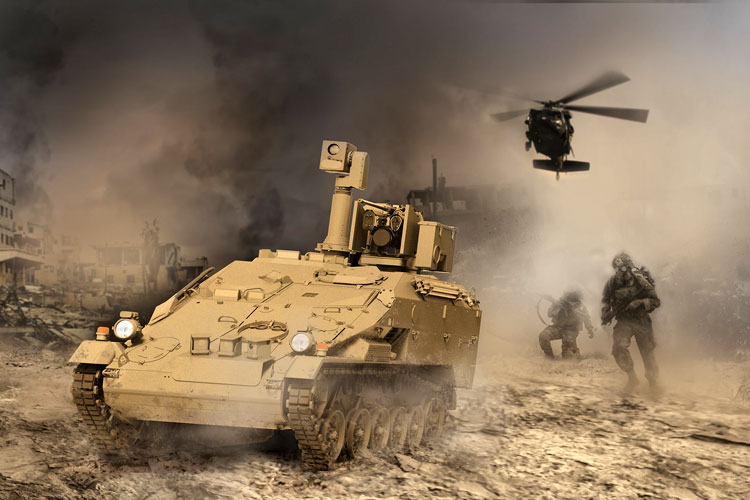 Rheinmetall at AUSA 2019 ~ Focus on providing next generation solutions to meet the US Army’s highest priority modernisation challenges.

Press Release, 11 October 2019: At this year’s Annual Meeting & Exposition of the Association of the United States Army (AUSA) in Washington, DC, on October 14–16, Rheinmetall will be showcasing a wide array of next-generation lethal technologies that address many of the Army’s top modernisation priorities. These include the next-generation combat vehicle, individual soldier lethality, long-range precision fires, and a synthetic training environment for cross-functional teams.

Rheinmetall, a global leader in defence systems, has several US subsidiaries, with locations in Virginia, Arkansas, Maine, and Michigan. American Rheinmetall Defense, based in Reston, VA, heads the Rheinmetall Group’s activities in the USA

Next Generation Lethality to Address the Modern Battlefield with 130mm Developmental Tank Main Gun and Full Array of Next Generation Medium and Large Calibre Munitions, Including Airburst Solutions, On Display:
Increased lethality, airburst technology, and networkability are all hallmarks of future weapons systems. At AUSA 2019, Rheinmetall will display its prototype for a future main battle tank primary armament, a 130 mm smoothbore gun, which represents leap ahead advances in main gun lethality. Visitors to the Rheinmetall stand can also learn about the Group’s innovative, expansive 40 mm ammunition family of munitions, including the latest airburst and fire control technology. Rheinmetall uniquely possesses the ability to develop fuse, munition and programming solutions in a single integrated system. Rheinmetall will also showcase its large calibre tank and artillery solutions, including solutions it can offer to the Army’s highest modernisation priority of long range precision fires. Rheinmetall’s US munitions and armaments efforts are led by American Rheinmetall Munitions with headquarters in Stafford, VA, and production in Camden, AK.

Expanding Soldier Lethality with Enhanced Fire Control Systems, Soldier Systems and Training Solutions: In the ongoing campaign to digitise the modern military, Rheinmetall is leveraging its unsurpassed systems expertise, setting particularly high standards for soldier systems, sensors, effectors, networking and C4I systems. For example, Rheinmetall Defence continues to expand its lead in the world of soldier systems, with solutions such as the Gladius 2.0 and the Argus New Generation. At AUSA, Rheinmetall will also highlight the company’s outstanding expertise in the field of simulation technology with the Lynx Turret simulator. Based in Biddeford, ME, American Rheinmetall Systems represents the Group’s electronics business in the USA. They will showcase a series of advanced fire control solutions, the MK93 advanced weapons mount and other next generation Soldier systems on the Rheinmetall stand.

Next Generation Lynx IFV for the US Army OMFV Program (Visit the Raytheon Stand): Visitors to AUSA can also visit a full digital display of the Lynx IFV platform being offered to the US Army in the OMFV program on the Raytheon booth located on the lower level of the AUSA exhibition. Raytheon Rheinmetall Land Systems, a recently established Joint Venture, is offering the next generation Lynx IFV to the US Army. The Lynx IFV recently was one of two IFV’s down selected by the Australian Army in its Land 400 Phase 3 programme and represents the only true, next generation IFV currently available to global customers.