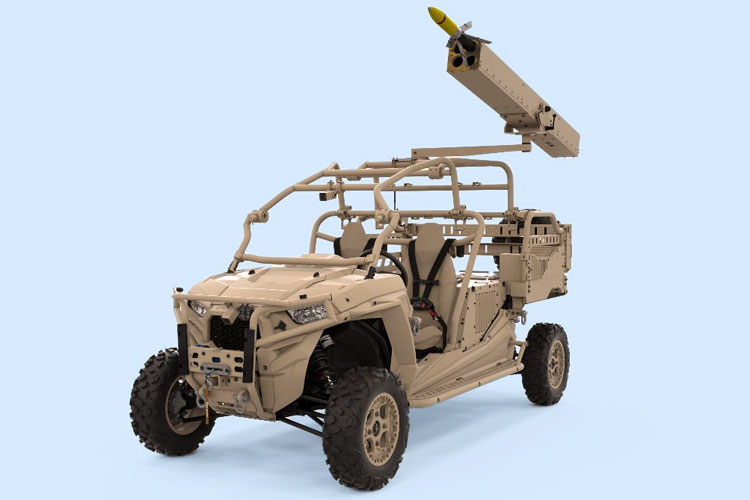 Arnold Defense has announced that the company will exhibit its FLETCHER 2.75-inch laser guided Rocket Launchers on multiple stands at AUSA 2019.

With FLETCHER, first unveiled just over 2 years ago, Arnold Defense has made a bold departure from the traditional concept of use for 2.75-inch rocket systems; that of an area suppression weapon delivered by aviation assets. FLETCHER, optimised for use by both special and conventional forces to provide surface-to-surface precision effect, uses advanced rocket-guidance technology and ground-based launch platforms, meeting the demands of modern, vehicle-mounted and dismounted asymmetric warfare.

Following exceptional levels of international interest since its launch, Arnold Defense has further developed a number of supplementary ground and maritime-based concepts, expanding FLETCHER’s utility into the arena of Unmanned Ground Vehicles (UGV), naval and littoral platforms. Jim Hager, President and CEO of Arnold Defense has said “Since launching FLETCHER, Arnold Defense has exhibited widely on the international market where it has garnered significant interest world-wide, especially from Special Operations units. Our rocket launchers are already internationally well-established on airborne platforms, so transitioning into the land and marine environments with FLETCHER is a natural progression”.

Arnold Defense has also recently revealed the newest member of their rocket launcher family, the Multiple Launch Hydra System (MLHS). Offering the same capability as FLETCHER but with dramatically greater capacity, the MLHS holds 23 rockets, over FLETCHER’s 4 and is set to transform the surface defence world by delivering a low-cost, high-capacity surgical strike capability. Whilst the MLHS is a new system, it represents a significant product development of Arnold Defense’s FLETCHER system.

The configurations of FLETCHER on display at this year’s AUSA will showcase some of the system’s versatility and will be found on the following stands: Navistar Defense – on the SOTV-B at Booth 2625; Dillon Aero – on a Toyota Hilux at Booth 8323; Moog Inc. – on the XM813 turret at Booth 3025; and BAE – on a swing arm at Booth 6343.

Jim Hager: “The development of FLETCHER and MLHS demonstrates our commitment to driving innovation; this facet of Arnold Defense’s ethos being key to our ability to remain ahead of a constantly and rapidly evolving defence environment.” He added “We are delighted to be showcasing FLETCHER at this year’s AUSA. The opportunity to have several systems on display demonstrates the exceptional levels of interest in our highly versatile FLETCHER system.”

About Arnold Defense: Arnold Defense has manufactured more than 1.25 million 2.75-inch rocket launchers since 1961 for the US Army, US Navy, US Air Force and many NATO customers. They are the world’s largest supplier of rocket launchers for military aircraft, vessels and vehicles. Core products include the 7-round M260 and 19-round M261 commonly used by helicopters; the thermal coated 7-round LAU-68 variants and LAU-61 Digital Rocket Launcher used by the US Navy and Marines; and the 7-round LAU-131 and SUU-25 flare dispenser used by the US Air Force and worldwide.

Today’s rocket launchers now include the ultra-light LWL-12 that weighs just over 60 pounds (27 kg.) empty and the new Fletcher (4) round launcher. Arnold Defense designs and manufactures various rocket launchers that can be customized for any capacity or form factor for platforms in the air, on the ground or even at sea.

Arnold Defense maintains the highest standards of production quality by using extensive testing, calibration and inspection processes. Their employees’ focus on quality earned Arnold Defense the prestigious ISO-9001-2015 certification from the International Organization for Standardization in Quality Management, and they have maintained annual recertification consecutively since 2003. The Company, located just south of St. Louis, Missouri, employs professional fabricators, welders, electronic engineers and quality control experts who manufacture thousands of rocket launchers annually and earned the “Small Business of the Year” award from Lockheed Martin in 2013.