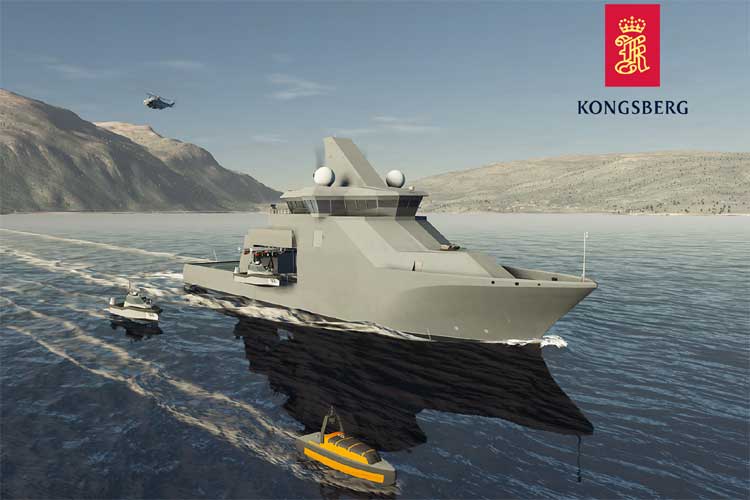 In a ceremony in Oslo today Kongsberg unveiled a new naval ship design called Vanguard, which they say will be a a game changer in naval operations.

Press Release, Oslo, 26 September 2019: Kongsberg Gruppen ASA (KONGSBERG) in a ceremony in Oslo today unveiled a new naval ship design called Vanguard. The concept combines long experience in both the maritime and naval sectors to design a platform that meets modern threats and demands for safety, security, economy and environment.

The Vanguard couples KONGSBERG’s knowledge, technology and systems together with the competence coming from the Norwegian Maritime and Offshore Industry. The Vanguard fulfils the needs of coastal nations for both military and civilian operations, such as Search & Rescue, Harbor and Assets Protection, Subsea Survey, Exercising Authority and Sovereignty, Anti-Access/Area-Denial, Anti-Submarine Warfare and Mine Clearance, and Detection and Disposal.

Vanguard, by design, is highly adaptable and capable of fulfilling a multitude of roles. It is designed with a multi-role hangar for air, surface and sub-surface assets. Easily interchangeable mission modules and extensive use of unmanned vehicles enables quick change of operational roles. The Vanguard is also based on an open architecture to integrate and take advantage of new technology as it becomes available.

“The Vanguard by KONGSBERG represents a game changer in naval operations. Combining our experience from the maritime, offshore and naval sectors, this innovative concept provides an adaptable and affordable solution to meet the operational needs of coastal nations”, says Eirik Lie, President Kongsberg Defence & Aerospace AS.

Featured, KONGSBERG, Naval Operations, Vanguard
You may also like