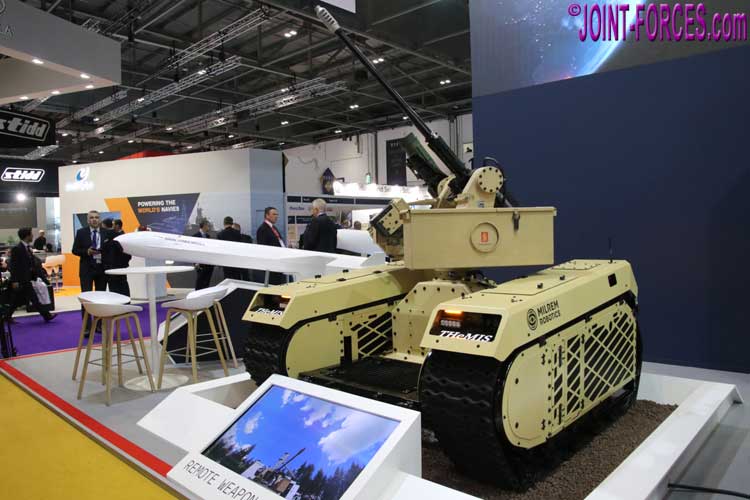 Two THeMIS UGVs delivered to the Royal Netherlands Army were used in a live firing exercise in Austria recently. One was equipped with the deFNder RWS from FN Herstal and the other was used as a transportation platform.

“In 2015 we exhibited the first THeMIS concept here at DSEI in London. Now, four years later, after extensive testing with industry partners and NATO forces in very demanding environments we are proud to be back here and present a mature and robust product that will greatly enhance warfighting capabilities,” stated Kuldar Väärsi, CEO of Milrem Robotics.

“Our engineers have taken into account the feedback from different armed forces and carried it into the design creating a really robust and reliable tool to support dismounted troops,” Väärsi added.

The THeMIS is a multi-purpose tracked vehicle that can be equipped with other warfighting technology such as weapon systems, tethered drones, IED detection devices and much more. It has become the industry standard UGV sought out for various payload integration projects. Together with partners like Kongsberg, FN Herstal, MBDA, ST Engineering etc a dozen different systems have already been integrated. Live firing tests have been conducted with five different weapon systems, including an anti-tank missile launcher.

In addition, Milrem Robotics is working on enhancing the vehicle with autonomous functions including point-to-point navigation, obstacle detection and avoidance. Autonomous functions development is focused on mobility alone, not on weapon systems deployment.

The first fifth generation THeMIS vehicles have already been delivered to the Netherlands and Norway as logistic platforms intended to carry gear and supplies with an option to be integrated with additional warfighting equipment. The 5th generation THeMIS can be found in the Estonian Pavilion and Kongsberg’s stand at DSEI 2019.