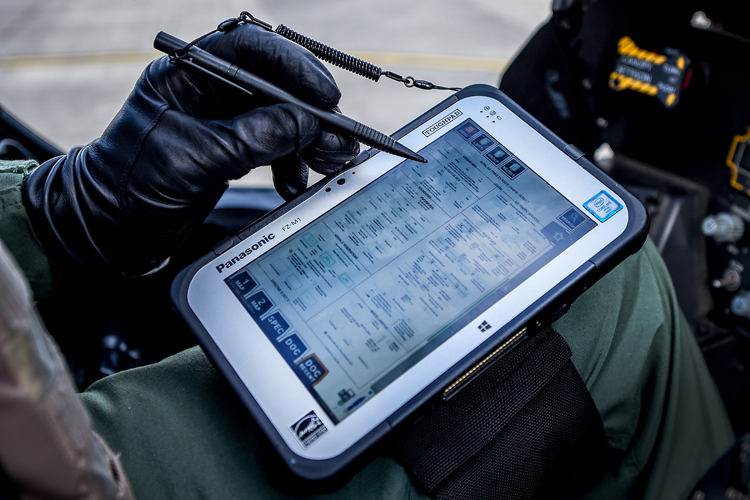 Generic image of the GECO tablet for context - it does not show the BLOS capability [Crown Copyright: Darren Edds]

Inzpire Limited has further enhanced the functionality of its GECO Mission Support System by designing and delivering a Beyond Line Of Sight communications system.

Press Release, 06 September 2019: The capability, which was developed in response to an urgent operational requirement (UOR), uses satellite communication enabling users to communicate over great distances from virtually anywhere in the world using the company’s tablet-based electronic flight bag. A global system for mobile communications (4G) option is available for use during training where a suitable network exists, enhancing connectivity and reducing cost.

Designed by Inzpire’s ex-military aviators and highly-experienced engineers, the secure messaging function of the beyond line of sight capability allows messaging groups to be created and customised in real time on the military-grade tablet. Default messages are stored on the system to speed up the sending of routine messages, whilst emergency messages are also stored and can generate instant alerts and responses. A read receipt function has also been developed to enhance awareness, ensuring the sender can keep track of the status of their messages and whether they have been received and read.

To enhance awareness during missions, the new beyond line of sight capability also provides the operator with live location updates of other users, both on the ground and in the air. With the functionality being developed by ex-military aircrew who understand the sensitive nature of missions, the position sharing feature can also be turned on or off.

Jonny Smith, Inzpire’s Head of Mission Systems, said: “The addition of the beyond line of sight capability is a game changer for the GECO system and its users. Fully integrated with the vast array of other GECO system features, the beyond line of sight communications capability allows vital safety and situational awareness updates to be exchanged over great range between aircraft and their operating base. Furthermore, the GECO System is a totally ‘carry-on’ solution, requiring no aircraft modification, offering hugely reduced cost and timescale. The capability makes missions safer, more effective and offers outstanding value for money.”

Inzpire’s GECO System: Inzpire’s GECO System is designed to enhance the safety of missions through its suite of safety and aircrew assistance applications. The system increases mission effectiveness through the provision of situational awareness and decision assistance applications, whilst offering outstanding value for money through the use of commercial off the shelf hardware solutions where appropriate. There are over 400 GECO Systems in service with the Royal Navy, Army Air Corps and the Royal Air Force along with overseas customers including the Royal Jordanian Air Force and the Indonesian Air Force.

Inzpire Limited will be exhibiting at DSEI from 10 – 13 September and will be delivering a media brief with an RAF customer about the use of BLOS on operations at 1530 on Wed 11 Sep.

Beyond Line Of Sight, BLOS, Featured, GECO, GECO Mission Support System, Inzpire
You may also like