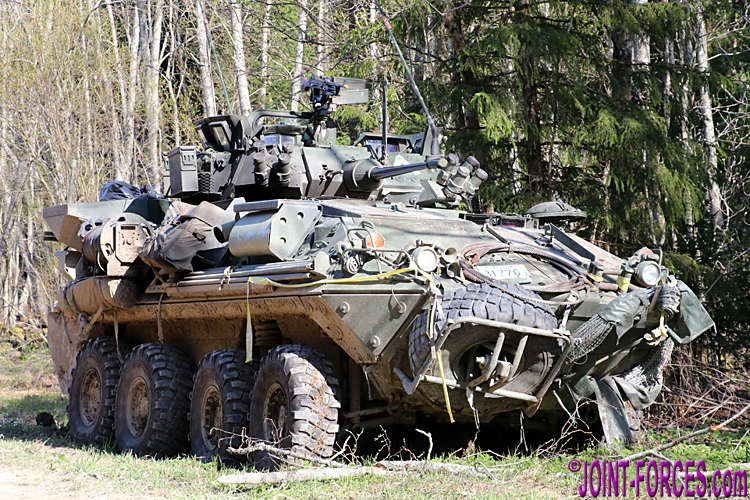 MND Press Release, London ON, 16 August 2019: The Government of Canada is taking another step to provide the Canadian Armed Forces (CAF) with the modern equipment it needs to operate across the spectrum of operations with better protection against a variety of threats, as outlined in Canada’s defence policy, Strong, Secure, Engaged.

The Honourable Harjit S. Sajjan, Minister of National Defence, announced that the government will acquire 360 combat support Light Armoured Vehicles (LAV) from General Dynamics Land Systems-Canada (GDLS-C). Funds for the purchase are in the approved budget for Canada’s defence policy, Strong, Secure, Engaged. The Government of Canada also intends to provide a repayable loan to GDLS-C.

To maximise the economic benefits of this project for Canadians, the supplier will reinvest an amount equal to the value of this contract – dollar-for-dollar – back into the Canadian economy to create jobs and opportunities for innovation. In addition to the almost 1,650 jobs at the General Dynamics Land Systems (GDLS) plant in London, there are close to 8,500 jobs across Canada that help to supply necessary parts and equipment for the construction of light armoured vehicles.

The LAV is essential to the Army’s combat fleet, and supports our women and men in uniform on a range of operations including domestic disaster relief during the widespread flooding experienced in New Brunswick, Quebec and Ontario and overseas peace support missions. The LAV is a tested and proven platform that meets Canada’s Army needs. Having similar combat support vehicles in the Canadian Armed Forces fleet will offer a number of operational advantages, including reduced training and sustainment costs, as well as the availability of common spare parts to fix vehicles quickly during critical operations.

Armoured combat support vehicles serve key roles such as command posts, ambulances, and mobile repair. This new fleet will offer the protection and mobility that CAF members need to conduct their work in operational environments.

Minister of National Defence, Harjit S. Sajjan: “The LAV is the backbone of the Army’s combat fleet, and supports our women and men in uniform on a range of operations from domestic disaster relief such as Operation LENTUS to overseas peace support missions. I am pleased to be moving forward with the strengthening of our fleet of armoured combat support vehicles as committed to in our defence policy, Strong, Secure, Engaged while at the same time supporting Canadian jobs and innovation through our partnership with GDLS-C.”

Minister of Public Services and Procurement and Accessibility, Carla Qualtrough: “We are committed to providing the women and men in uniform with the equipment they need to carry out their important work. As part of Canada’s defence policy, Strong, Secure, Engaged today’s announcement is yet another step closer to delivering on our plan to provide the Canadian Armed Forces with the modern equipment it needs, within the outlined budget, all while securing good middle class jobs across the country.”