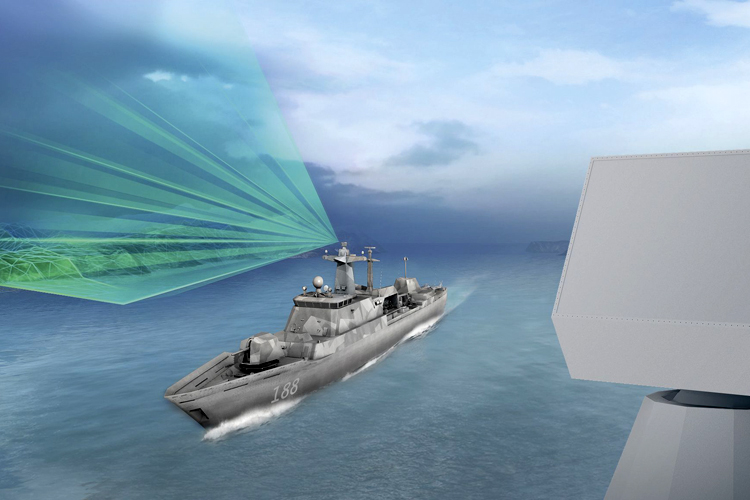 Press Release, Ulm, 01 August 2019: The sensor solutions provider HENSOLDT is equipping the second batch of the German Navy’s K130 corvettes with its TRS-4D Rotator naval radar and its MSSR 2000 ID friend-or-foe identification system (IFF). Only six months after the order was placed, the company has now successfully passed the factory acceptance test by the German procurement authority BAAINBw for the second system.

“With the TRS-4D, the corvettes are getting an extremely powerful radar system,” said HENSOLDT’s CEO Thomas Müller. “Since we have started to produce our radars in series a short time ago, we have been able to reduce the time required for delivery to our customers considerably.”

HENSOLDT has orders for seven radars which are intended for five ships and two land-based systems and are to be delivered by 2022. The company had previously equipped the first K130 batch with its proven TRS-3D radar. For the second batch, the TRS-4D has now been ordered to be supplied in a version comprising a mechanically rotating antenna (TRS-4D Rotator), which is also under contract for the US Navy’s littoral combat ship (LCS). On board the new F125 frigate, the TRS-4D is used in a configuration comprising four fixed planar arrays. This radar system is part of a family of products which also include a ground-based air defence radar, TRML-4D. It thus benefits from shorter production cycles, continuous product improvements as well as advantages in stock levels of spare parts and training.

The TRS-4D Rotator has been designed to be used for anti-aircraft and anti-surface operations. Its rotating antenna combines mechanical and electronic azimuth scanning, which allows targets to be detected and tracked very quickly. Thanks to its higher sensitivity, the AESA radar allows more precise detection, especially of small and manoeuvring objects, as well as faster confirmation of the target, which means that the ship crew has more time to respond to threats. The radar can be specifically programmed according to the customer’s needs, and its characteristics can be changed via the software to match new requirements that arise during its useful life.

The system also includes an MSSR 2000 I secondary radar for friend-or-foe identification (IFF), which complies with all IFF standards, even the latest “Mode S / Mode 5”. This is all the more important as all NATO troops and their allies are currently in the process of converting their IFF systems to Mode 5. The Mode 5 capability enables the troops to take part in joint and combined operations with NATO and other allied forces.