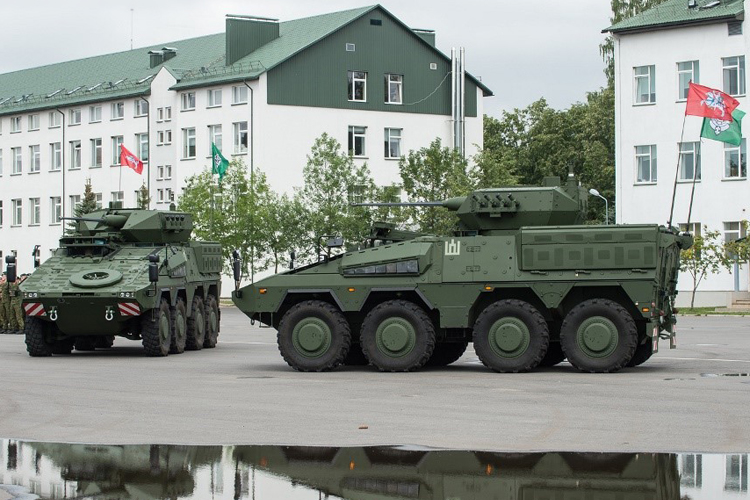 The Lithuanian Ministry of National Defence has announced the formal handover of its first two BOXER vehicles which will be known as the VILKAS IFV.

“This is one of the most ambitious projects of upgrading the Lithuanian Armed Forces in the recent years, it will help ensuring the security of Lithuania for several decades to come,” Minister of National Defence Raimundas Karoblis said at the formal handover ceremony.

Minister underscored that “such a significant qualitative leap that strengthens our capabilities with modern weaponry matched to our needs demonstrates the responsibility we take the security situation with, the adequacy of our response and our readiness for defence.”

“However, today it is probably even more important and relevant to send a message to the Lithuanian society as well – we have paid too much for the freedom and independence already to afford to be stopped by the VILKAS project. A safe and strong Lithuania needs a strong armed forces, and that requires a fundamental updating. A strong and modern armed forces is also our duty, our responsibility to our state, the future of our children, and to everyone who fought for the freedom of Lithuania,” Minister R. Karoblis stressed.

Chief of Defence of Lithuania Lt Gen Jonas Vytautas Žukas underscored that “the message that we are taking care of the security of our country responsibly and that we are ready to rebuff at short notice will be significantly more convincing from now on.”

“The [M113] armoured personnel carriers we have been using can only bring troops to the battlefield and ensure fire support. In comparison, the VILKAS IFVs will not only transport soldiers quickly and safely but will also engage in a battle by neutralising armoured and unarmoured targets effectively at the distance of up to 4 kilometres,” Lt Gen J. V. Žukas said.

The VILKAS IFVs have been made by a German manufacturer ARTEC according to the requirements of the Lithuanian Armed Forces. The vehicles have Israeli-made remote weapon station turrets, US-made 30 mm MK-44S cannons and Israel’s Spike LR anti-tank missiles, and other integrated specialised equipment and electronic systems. According to the EUR 385.6 million contract made in 2016 by the IFV manufacturer ARTEC and the Organisation for Joint Armament Cooperation (OCCAR), all 88 VILKAS IFVs purchased by Lithuania will be delivered to the Lithuanian Armed Forces until late 2021.

Serial production of the fighting vehicles for the Lithuanian Armed Forces was started after a year of intense testing in training areas and testing centres of Germany and the Netherlands. The combination of the VILKAS IFV firepower, manoeuvrability and crew protection meets the demands of the Lithuanian Armed Forces best in terms of national defence and international deployments. The VILKAS IFVs will be used by units of the Mechanised Infantry Brigade Iron Wolf – Lithuanian Grand Duke Algirdas Mechanised Infantry Battalion and the Grand Duchess Birutė Uhlan Battalion.

In order to keep the link with the history of Lithuania and traditions of the Lithuanian Armed Forces, it was agreed by the IFV manufacturer and Lithuania that the IFVs produced according to Lithuania’s requirements would be called ‘VILKAS’ instead of ‘BOXER’.