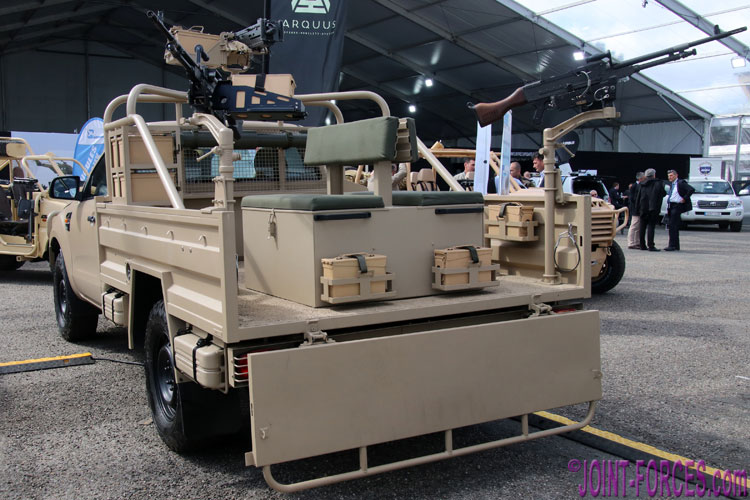 Realising that few of our readers are likely to see these specialist vehicles up close in the foreseeable future we undertook a walk-round of each and commence our photo coverage with TRIGGER, the smallest and newest of the trio.

According to a press release issued by the manufacturer prior to SOFINS 2019, “the TRIGGER is a light, versatile vehicle, designed for personnel and supply transport. It can be deployed for patrol and fire support missions, thanks to its reinforced rear platform, which grants it the largest loading capability in its class. The TRIGGER offers important capabilities in terms of autonomy and ruggedness, which makes it ideal for long-range missions with minimal maintenance.”

We first encountered this new vehicle when it was unveiled at the Eurosatory 2018 defence expo in Paris last June by the French company ARQUUS, until May 2018 known as Renault Trucks Defence and which also incorporated both ACMAT and Panhard brands. Based on the Ford Everest derivative of the Ford Ranger, originally designed in Australia and produced in Thailand, TRIGGER is a sibling of the ARQUUS TRAPPER which has been ordered in quantity for French Armed Forces as the VT4.

For those interested in the technical specifications, the 4×4 TRIGGER has a GVW of 3,500kg and it can carry 1,300kg payload. Basic dimensions are 5,277x1860x1703mm high, the wheelbase is 3,220mm and ground clearance is 230mm under the axles. TRIGGER is powered by a 2,198cc Ford ZSD-422 Duratorq 4-cylinder turbo diesel engine (as used in the final model Land Rover Defender) through a six-speed manual gearbox. The version displayed at SOFINS, like the one seen at Eurosatory 18, had a two-door cab but a four-door is also available.

For the recent expo TRIGGER was displayed in two-door version with outward-facing rear bench seating for four troops. A single 12.7mm heavy machine gun was fitted to a pintle mount on the roll cage behind the cab, two 7.62mm general purpose machine guns were mounted on posts at the rear corners, four ammunition box racks were fitted inside the rear compartment, and a tower rack for main armament ammo boxes was positioned at the front left. Rifle bags were fitted to both cab doors for driver’s and commander’s personal weapons. If requested, a self-recovery winch, a communications package and other optional military equipment or systems can be supplied.