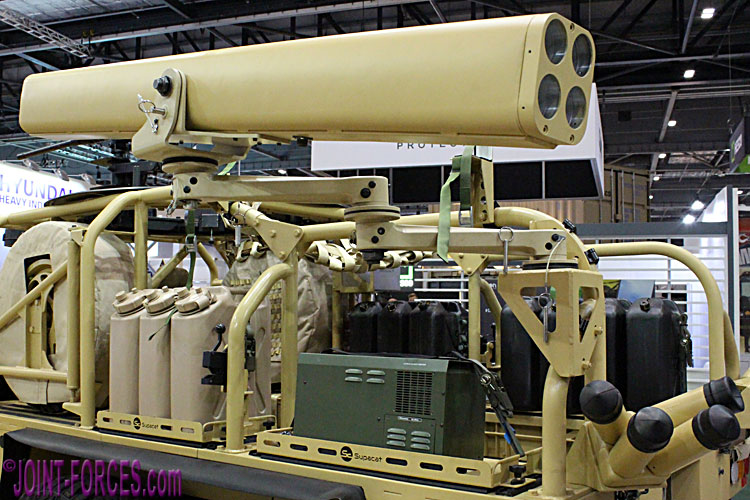 Arnold Defense has announced the first order for its FLETCHER Laser Guided Rocket Launcher which is also being displayed at the 2019 Quad-A Summit.

Press Release 1, 08 April 2019: Arnold Defense, the St Louis based manufacturer of 2.75-inch rocket launchers, is pleased to announce receipt of the first order for their unique FLETCHER Land Based, Laser Guided Rocket Launcher.

The FLETCHER 2.75-inch/70mm weapon system was first unveiled just 18 months ago at DSEi in London. Since the launch, FLETCHER has been showcased at a number of international exhibitions, generating exceptional levels of interest whilst Arnold Defense have continued with an ongoing development and investment programme to broaden and prove the system’s already revolutionary capability.

With FLETCHER, Arnold Defense has made a bold departure from the traditional concept of use for 2.75-inch rocket systems; that of an area suppression weapon delivered by aviation assets. Arnold’s evolution has FLETCHER using advanced rocket-guidance technology to utilise ground-based launch platforms, meeting the demands of modern, vehicle-mounted and dismounted asymmetric warfare.

FLETCHER’s unique design allows for ease of operation, maintenance and sustainment. It employs an existing suite of guidance modules, rockets and warheads, already used in well-known programmes and readily available to global forces. FLETCHER is supported by a team of global defence industry companies, collaborating under Arnold Defense’s leadership to combine their complimentary expertise.

The first customer for the FLETCHER system, who cannot yet be disclosed, has committed to purchasing FLETCHER due to the system’s ability to accurately engage targets at a range of over 5km, with a 100% hit rate in recent test-firings. This first order is for an initial batch of launchers, with a larger order expected to follow once successful user trials and demonstrations have been completed.

Mike Brown, Vice President and COO of Arnold Defense said, “Given that the FLETCHER concept was unveiled to the public only 18 months ago, Arnold Defense is delighted to have signed what we anticipate to be the first of many contracts for the supremely capable FLETCHER surface-based rocket launcher.” He added, “FLETCHER has generated huge interest globally with its unique capability to deliver organic, long-range precision firepower to even the smallest tactical element. It is great to see serious international interest now developing into firm orders.”

Arnold Defense will be showcasing two rocket launchers at the Summit; the 19-round M261 and their ultra-lightweight LWL-12 rocket launcher weighing in at just over 60 pounds (27 kg) empty. The M261 will be displayed on a AH-6 Little Bird with CFD International, and the LWL-12 will be with Arnold Defense on stand #1151 and also mounted on a MD969 Combat Attack helicopter, the latest evolution of MDHI’s iconic MD 900/902 series.

Arnold Defense is the world’s largest supplier of rocket launchers for military aircraft, vessels and vehicles; they have manufactured more than 1.2 million 2.75-inch (70mm) rocket launchers since 1961 for the US Armed Forces and a number of NATO customers. They design and manufacture rocket launchers that can be customised for any size, weight, capacity or form factor for platforms in the air, on the ground or at sea.

Arnold’s core products include the 7-round M260 and 19-round M261 commonly used by US Army helicopters; the thermal coated 7-round LAU-68 variants and LAU-61 Digital Rocket Launcher used by the US Navy; and the 7-round LAU-131 and SUU-25 flare dispenser used by the US Air Force. Their newest product, FLETCHER, is a 4-round laser target designated, ground-based rocket launcher; a unique concept and design that has seen exceptional levels of international interest.

Jim Hager, President and CEO of Arnold Defense said “2019 got off to a great start with the recent announcement of a contract that could be worth up to $74.3 million with the US DoD along with ever-growing international, special operations interest in Arnold’s ground-based rocket launcher, FLETCHER. As recently announced, FLETCHER has just won it’s first order. We are very much looking forward to focusing on our core business at Quad-A; a forum we know well and where we aim to showcase our continued innovation and dedication to providing only the best weapons systems to today’s modern warfighters”.

70mm rocket, Arnold Defence, Featured, FLETCHER
You may also like