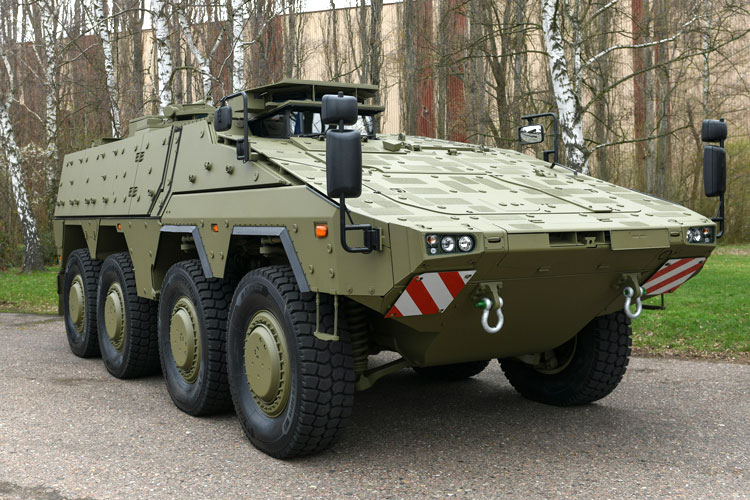 Press Release, 29 March 2019: The Australian Ambassador to Germany, H. E. Lynette Wood, senior Australian military representatives and senior Rheinmetall representatives have attended an official inspection ceremony in Kassel, Germany. The first Boxer Multi-Purpose Vehicle (MPV), being delivered to the Australian Government under the LAND 400 Phase 2 program, was inspected prior to being shipped to Australia in the coming weeks.

The Boxer vehicles will enable Army to locate, monitor and engage with enemy forces and ensure Australian soldiers are protected in combat. The vehicles will fill seven different roles on the battlefield: reconnaissance, command and control, joint fires, surveillance, multi-purpose, battlefield repair and recovery. The reconnaissance variant – accounting for 133 of the 211 vehicles – is equipped with Rheinmetall’s cutting-edge Lance turret system and armed with a 30mm automatic cannon. Once in Australia, these first Boxer vehicles will receive a number of Australia specific modifications prior to final delivery to the Army. Modifications include installation of Australian Army specific communications and computing equipment, a remote weapon station, and Australian Army paint.

Armin Papperger, Corporate CEO Rheinmetall AG, said: “Work on these first vehicles in Germany will help Rheinmetall transition the know-how necessary to establish a sovereign military vehicle industry in Australia and enable the local manufacture of combat vehicles. This, in turn, will underpin the enduring partnership with the Government to design, manufacture, deliver, support and modernise this world-leading capability.”

The Boxer CRV was selected after rigorous trials conducted by the ADF. Under Australia’s LAND 400 Phase 2 selection process, the Boxer CRV was chosen in 2016 as one of two candidates for Risk Mitigation Activity trials where the 8×8 wheeled armoured vehicle performed convincingly in the categories of survivability, mobility, firepower, and command & control.