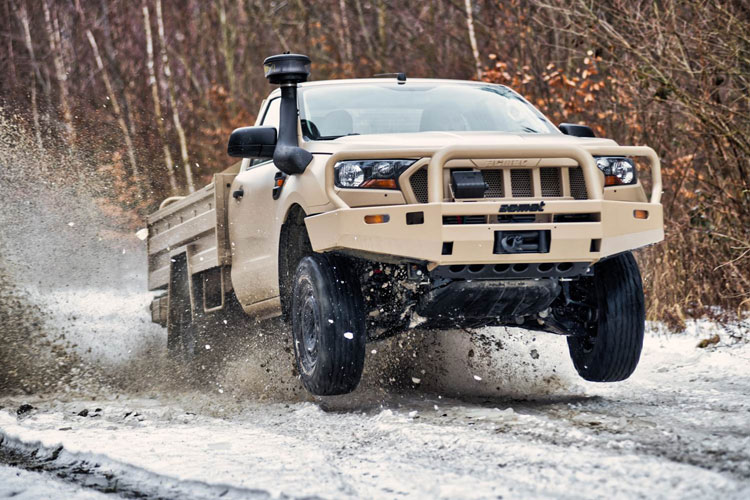 Major partner and supplier for the French Army, with more than 20,000 wheeled vehicles currently in service in the forces, ARQUUS is also a major shareholder of the Special Forces’ mobility.

Press Release, 22 March 2019: Expert of land tactical mobility, ARQUUS has designed and developed a complete range of vehicles dedicated to the Special Forces, with a special focus on autonomy, robustness, versatility and firepower. Among these vehicles, Panhard’s VPS and ACMAT’s VLRA have pioneer status, granting ARQUUS with historical know-how in the field of special vehicles. At SOFINS [2nd to 4th April 2019], ARQUUS presents three vehicles which perfectly meet the Special Forces’ needs: the BASTION, the SABRE and the TRIGGER.

Building on the VLRA’s (Véhicule Léger de Reconnaissance et d’Appui, a historical vehicle for the French Special Forces) success and experience, ARQUUS has developed the BASTION, a robust vehicle designed for all-terrain mobility, which is very successful worldwide. The BASTION’s armoured hull, specifically designed according to the NATO standards in terms of ballistic, anti-mine and anti-IED protection, offers a large internal volume, which can accommodate large quantities of equipment which guaranteeing the best level of comfort for the operators.

The SABRE benefits from the SHERPA Light’s proven base. It fits the Special Forces’ needs perfectly, in terms of armament, autonomy, payload, communication systems and robustness. Stealthy and extremely mobile, the SABRE is a vehicle of choice for all operations behind the enemy lines.

The TRIGGER is a light, versatile vehicle, designed for personnel and supply transport. It can be deployed for patrol and fire support missions, thanks to its reinforced rear platform, which grants it the largest loading capability in its class. The TRIGGER offers important capabilities in terms of autonomy and ruggedness, which makes it ideal for long-range missions with minimal maintenance.

At SOFINS, ARQUUS also presents its HORNET Lite RCWS, equipped with a 7.62 mm machine gun, which is part of the HORNET RCWS range. The HORNET will notably equip the GRIFFON and JAGUAR vehicles of the French Army starting in 2019.