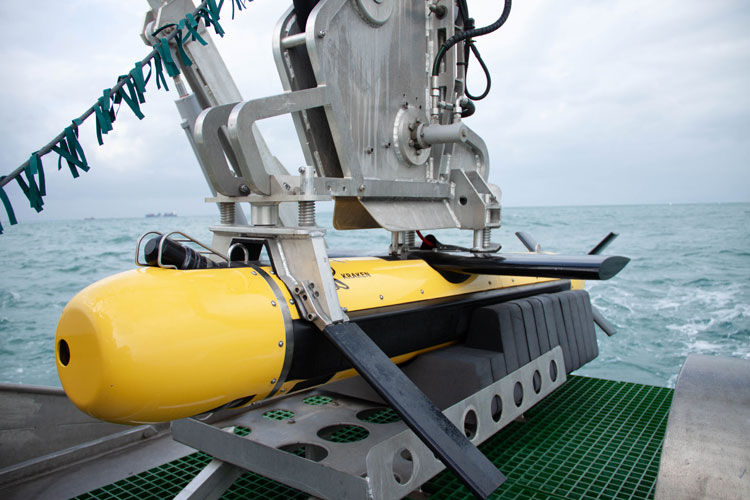 Press Release, 18 December 2018: Elbit Systems’ SEAGULL multi-mission Unmanned Surface Vessel (USV) recently completed a series of rigorous sea tests operating the Kraken Robotic Systems Inc.’s KATFISH Synthetic Aperture Sonar (SAS) towed system. These tests are an addition to a successful series of Mine Counter Measures (MCM) tests and exercises conducted by the SEAGULL over the past two years, including trials and exercises in participation with Western and other Navies.

Actively controlled, KATFISH is an intelligent towfish platform that was specifically designed for high-speed hunting of naval mines and underwater Improvised Explosive Devices. The system produces ultra-high definition seabed imagery and mapping for a variety of military and commercial applications and is capable of transmitting the sonar data in real time. Integrated onboard the SEAGULL, it provides a high performance sensor contributing to an end-to-end, unmanned, mine hunting capability.

KATFISH is deployed and recovered by the same Launching and Recovering System (LARS) that the SEAGULL operates for its Side Scan Sonar (SSS), which can be installed upon customer demand. KATFISH is an addition to a long list of sensors and effectors that have already been successfully integrated in the SEAGULL further enhancing its modularity.

SEAGULL offers endurance of 4 days and mission sea-keeping of up to Sea-State 5 and is capable of executing SAS search missions, stand-alone or as part of an MCM toolbox. SEAGULL is operational with the Israeli Navy and is fully compliant with the COLREGs International Regulations for Preventing Collisions at Sea.