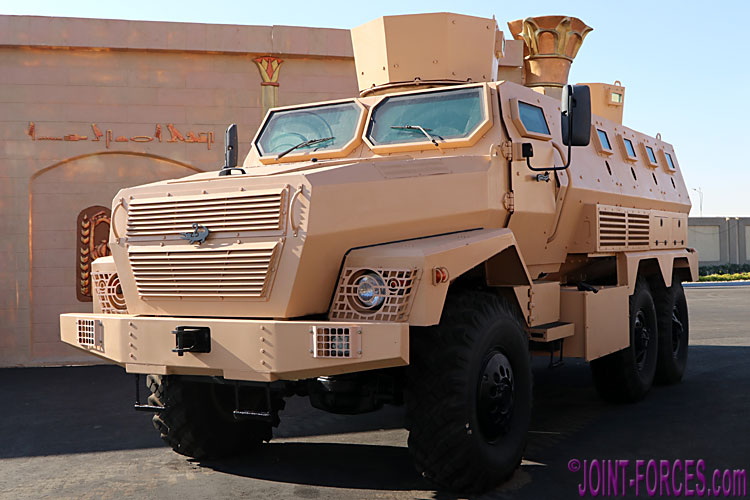 In 2015 the Egyptian Armed Forces fielded the first of the homegrown MRAP now known as TEMSAH 1 and the family has today expanded to five vehicles, writes Bob Morrison.

The original TEMSAH, the name translates as Crocodile in Arabic, is a 4×4 Mine-Resistant Ambush-Protected (MRAP) vehicle with a GVW (gross vehicle weight) of 13.3 tonnes including 2,200kg payload. Designed produced by the Kader Factory For Developed Industries in Cairo, part of the Egyptian Ministry of Defence Industrial Engineering Complex, it can transport six dismounts in addition to a crew of two. Powered by a 230hp turbo-diesel engine, the vehicle is said to have a top speed of 80km/hr (50mph) when fully loaded and a range of 600km (375 miles). Without taking the machine gun turret or spare wheel on the rear carrier into consideration, TEMSAH 1 measures 6,000 x 2450 x 2600mm high.

Landmine protection is quoted as STANAG Level 4, ballistic protection including glazing is said to be BR7 and locally designed and produced anti-blast seats are fitted; the six dismounts sitting on inward-facing seats in the rear of the V-shaped hull. In addition to the machine gun turret there are three firing ports in each side and one in each of the two rear doors, all with armoured vision blocks above. It is understood that TEMSAH 1 will eventually replace the large fleet of mid-1980s design FAHD 4×4 armoured personnel carrier, of which we saw several in the outer security cordon guarding the Egypt International Exhibition Center, but at present most are believed to be deployed to Northern Sinai to counter the Islamic insurgency in that region.

With TEMSAH 1 having proved itself operationally, the Egyptian Army commissioned a 6×6 version capable of transporting eight dismounts plus a crew of two. Known as TEMSAH 2, this vehicle was accepted for service earlier this year and several examples were present at EDEX 2018 in Cairo at the beginning of December. Dimensionally TEMSAH 2 is almost identical to TEMSAH 1 other than it being 7,440mm long (8,040mm over wheel carrier) with the third axle adding 1400mm to the total wheelbase, which 4,925mm compared to 3,525mm for the original. The GVW of the 6×6 is quoted as being 16.475 tonnes including 2,675kg payload. Power pack and drive train are believed to be the same as used for the 4×4.

Another 6×6 member of the family on display at EDEX 18 was the TEMSAH BUS, which is a longer and taller variant of the TEMSAH 2 capable of transporting up to 24 troops (plus two crew) in eight rows of 2+1 forward facing seats. This vehicle, which has a kerb weight of 16 tonnes and payload of 5,300kg, offers slightly less ballistic protection at BR6 but still has STANAG Level 4 mine protection. As per TEMSAH 2 there are four firing points in each side, though of a different design, and there is another port in the single rear door. Height to top of hull is increased to 3100mm and total length is 9,150mm (without spare) as wheelbase has been significantly increased to 4,555mm + 1400mm. This added weight reduces top speed slightly to 78km/hr.

The smaller TEMSAH 3 PPV (Protected Patrol Vehicle) was unveiled in prototype form on the indoor stand at EDEX 18. Although not yet ordered, as the prototypes were designed by the military to fill a specific operational requirement, it is presumed that a bulk order will be placed in the not too distant future. Weighing 6.4 tonnes, including 1,400kg payload, the 4×4 TEMSAH 3 is powered by a 6.5 litre, 205hp turbo-diesel engine that gives it a road speed of 110km/hr (69mph) and cruising range of 440km (275 miles). Ballistic protection is quoted as being BR6 and up to four passengers can be carried in addition to the crew of two. The vehicle displayed at EDEX 18, configured for three crew with space to carry two more in the rear, had a Remote Weapon Station fitted.

This version of TEMSAH 3 has a Remote Weapon Station [©BM]

Unfortunately we were unable to either see these vehicles operating off-road, or travel in them, during our 48-hour whistle-stop trip out to Cairo (if we had known UK MoD would unapologetically cancel our long-standing AUTONOMOUS WARRIOR invite on the grounds of “over capacity” we would have stayed longer in Egypt, where in contrast we had been made most welcome). However though we only saw static vehicles, several officers and NCOs we talked to told us they consider TEMSAH to be a quantum leap forward from the FAHD armoured personnel carriers they are replacing and if anyone should know it is the guys who may have to trust their lives to them.

Finally, I said that the TEMSAH family consists of five vehicles but I have only mentioned four so far. The LIGHT TEMSAH actually bears little in common with its siblings as it is a petrol-powered 4×4 SUV conversion but I have included a shot of one of the two variants displayed at EDEX 18 for those who may be interested. I suspect the base vehicle for LIGHT TEMSAH is a Toyota Landcruiser.

Note: KADDB in Jordan also produces an armoured vehicle called TEMSAH but that Crocodile is tracked.